When Will the Kiwi’s Remarkable Run End? Now. 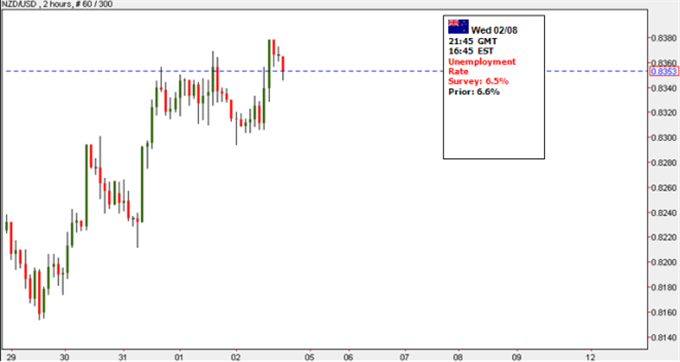 The New Zealand Dollar posted another strong week, gaining 1.31 percent against the U.S. Dollar, topping all of the major currencies covered by DailyFX in the process. The Kiwi’s run this year has truly been remarkable, despite not being the highest yielding major currency: it is up 7.53 percent year-to-date. Global data has been improving, as evidenced by January’s labor market for the United States and the recent swath of better than expected PMI figures across the Euro-zone. These prints, coupled with additional monetary easing measures signaled by the Federal Reserve and other major central banks, has contributed to the New Zealand’s meteoric rise thus far in 2012.

And yet, despite all of this optimism surrounding the markets, the Kiwi’s aggregate outlook for the period ahead is neutral, given the balance between the fundamentals and the technicals. Briefly, from a technical picture, the NZD/USD’s sharp advance has now become overbought, with the daily RSI reading now at 77.80. The pair also broke out of a steep ascending channel in place since mid-December, positioning it neatly up against right shoulder resistance on a long-term head and shoulders pattern that has been forming since late-2010.

While the technical picture is dictating a pullback in the near-term, the fundamentals that have led the Kiwi higher remain in place: expectations of more monetary easing in the future by the world’s largest central banks; improving data out of the United States; and a sense of calm emerging over the Euro-zone debt crisis. Domestically, the only significant piece of data due are the unemployment figures, which are forecasted to show a slight improvement in the New Zealand labor market. Unemployment is forecasted to have ticked slightly lower in the fourth quarter, from 6.6 percent to 6.5 percent, on the back of a projected 0.4 percent quarterly gain.

Accordingly, the best conclusion to draw from the picture recent price action is as such: the long-term downtrend remains, but the intermediate trend is firmly to the upside. A shift in short-term sentiment as market participants take profits may occur, and technically speaking that is warranted. Fundamentally, with Euro-zone issues on the backburner (ignoring the potential Greek default as that is too complex to speculate on in this piece alone) and global growth prospects turning higher, a continuation could occur. Barring some unforeseen ‘black swan’ that throws awry liquidity markets, we will looks towards a technical pullback to enter long NZD/USD positions, as the fundamental picture remains ripe. – CV