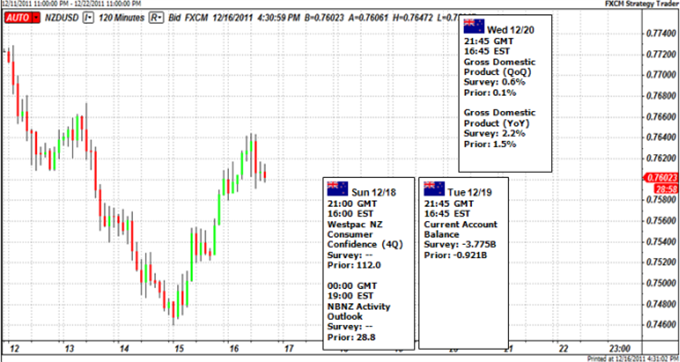 The New Zealand dollar slipped to a fresh monthly low of 0.7460 as market participants scaled back their appetite for risk, but we may see the high-yielding currency gain ground in the week ahead as the economic docket is expected to highlight an improved outlook for the isle-nation. Indeed, we’re expecting to see GDP expand 0.6% in the third-quarter following the 0.1% rise during the three-months through June, and the faster rate of growth may encourage the Reserve Bank of New Zealand to scale back the emergency rate cut from back in March as policy makers expect the region to benefit from the rebuilding efforts from the Christchurch earthquake.

However, as the current account deficit is expected to widen the most since the fourth-quarter of 2008, New Zealand’s reliance on international financing could dampen the appeal of the high-yielding currency, and the kiwi may come under increased pressure next week as the heightening risk for contagion bears down on market sentiment. As European policy makers struggle to address the sovereign debt crisis, RBNZ Governor Alan Bollard held a cautious outlook for the region, citing that commercial banks are likely to face increased funding costs as a result of the ongoing turmoil in the global financial system. In turn, it seems as though the central bank will keep the benchmark interest rate at 2.50% throughout the first-half of 2012, and we may see Mr. Bollard continue to talk down expectations for a rate hike as the central bank curbs its outlook for growth and inflation. According to Credit Suisse overnight index swaps, investors are pricing a small chance for lower borrowing costs over the next 12-months, and we may see market participants increase bets for a rate cut as the outlook for global growth deteriorates.

As the NZD/USD carves out a lower high in December, we should see the exchange rate track lower over the remainder of the year, and the pair may threaten the rebound from the previous month (0.7370) as the fundamental outlook for the isle-nation deteriorates. In turn, we should see the kiwi-dollar maintain the downward trending channel from back in August, and the high-yielding currency may face additional headwinds in 2012 should the outlook for the world economy turn increasing bleak. - DS