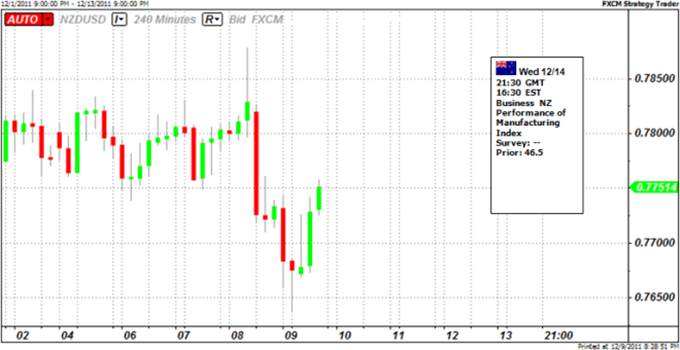 The New Zealand Dollar returned to its former trend, posting a decline for the fifth time in six weeks to start December. The New Zealand Dollar has not posted two consecutive weekly gains since early October. Considering New Zealand has a greater risk of a credit event (measured by Credit Default Swaps) than its neighbor, Australia, it is of little surprise that the Kiwi performed worse than the Australian Dollar amid a week of choppy trading. Given the renewed uncertainty in the periods ahead, on the back of another underwhelming Euro-zone summit, it would not come as a shock if the Kiwi were to continue lower against the safe haven currencies, the Japanese Yen and the U.S. Dollar, going forward.

Even so, such a light event risk week for the New Zealand Dollar suggests that it will likely follow broad market sentiment rather than dig out a trend irrespective of risk trends. The most interesting bit of data expected across the wires comes early in trading on Monday in New Zealand, when the Westpac Consumer Confidence reading for the fourth quarter is due. Given the central bank’s outlook on the economy, that “conditions will weaken further,” there is a good chance that sentiment has deteriorated in recent weeks; we expect the report to indicate just that. In turn, a disappointing confidence report will weigh on the Kiwi.

In terms of event risk for its neighbor, Australia, which could influence the Kiwi given the two currencies’ strong correlation, the most noteworthy piece of data due would be the consumer inflation expectation for the month of December. Inflation has been steadily cooling off in Australia, and similar trends could be mirrored on the price pressures influencing the New Zealand economy.

Overall, the direction of the New Zealand Dollar will be determined by the flow of capital in the markets over the next week. That is to say, given the lack of fundamental risk on the docket, the New Zealand Dollar will be guided by general risk trends. If markets continue to digest the Euro-zone summit in a semi-positive light – nothing groundbreaking but steps in the right direction – then the Kiwi has the ability to nudge higher. Complete resolution would lift the Kiwi back to its glory days of 2011, when it was among the top performing currencies along with the Swiss Franc. However, given the lack of response by markets on Friday – attribute it to seasonality conditions or general disappointment – we’d suspect that market participants are still not keen on taking on excess risk. As such, we approach the coming period with caution, and will look for the New Zealand Dollar to consolidate, less broad market sentiment defines a discernible trend. –CV