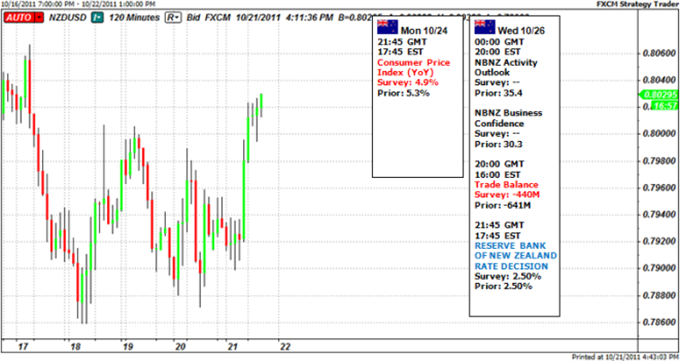 The New Zealand Dollar was the worst performing currency on the week, falling 1.50 percent, 1.30 percent and 1.12 percent against the Japanese Yen, the Swiss Franc and the British Pound, respectively. It’s worth noting that the Kiwi finished lower against the U.S. Dollar as well, despite the Dollar-dump that occurred from the middle of the week through close on Friday.

Looking ahead, there are two key events on the docket that will spark significant price action for Kiwi-based pairs. On Monday, the consumer price index is due, and the print carries more weight than other inflation readings of other developed economies, considering it is released quarterly. According to a Bloomberg News survey, economists forecast the New Zealand consumer price index to show signs of easing price pressures, with the median estimate calling for a 0.7 percent gain in third quarter, on a quarterly basis. Year-over-year, the index is expected to show that price pressures fell to a 4.9 percent clip, from 5.3 percent in the third quarter a year ago.

Considering global growth showed signs of weakening in the third quarter, inflationary pressures do indeed to be tailing off for the New Zealand economy, though not by much. This will be addressed in the Reserve Bank of New Zealand’s October policy meeting on Wednesday.

At its last meeting on September 14, the Reserve Bank of New Zealand decided to maintain its key benchmark interest rate at 2.50 percent, on the outlook that “global economic and financial risks have increased.” Still, the central bank noted in their policy assessment that “domestic economic activity has surprised to the upside,” a welcome development following the earthquakes that struck major metropolitan areas over the past few months. The relative strength of the New Zealand economy has led to a particularly strong New Zealand Dollar throughout 2011 thus far, which as the central bank noted was “having a dampening influence on some other parts of the tradable sector and on imported inflation.”

The Credit Suisse Overnight Index Swaps are pricing in 41.0-basis points over the next 12-months, and there is a slight 2.0 percent of a 25.0-basis point rate cut at Wednesday’s meeting. Nonetheless, it was determined that “if recent global developments have only a mild impact on the New Zealand economy, it is likely that the [key interest rate] will need to increase.” Accordingly, if volatility calms due to positive developments out of Europe, the RBNZ appears supportive of a higher interest rate and thus a stronger Kiwi in the future. –CV