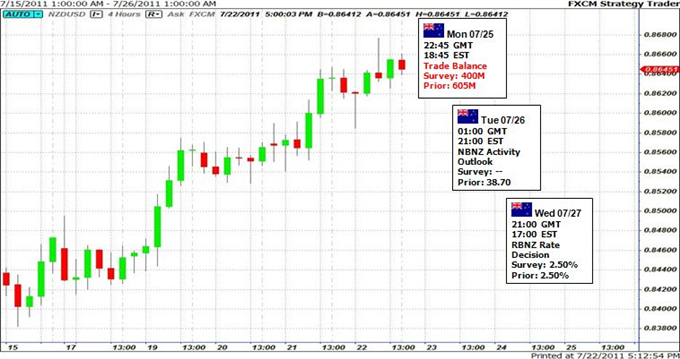 Data was light this past week out of New Zealand, with the only significant data release the consumer price index, released late Sunday. The price data was particularly important, as the data is only released quarterly, as opposed to monthly like other advanced nations, such as the Euro-zone or the United States. Still, with price pressures rising at 1.0 percent on a quarterly-basis and 5.3 percent on a yearly-basis, beating the 0.8 percent and 5.1 percent estimates, respectively, it is clear that the lower interest rate that the Reserve Bank of New Zealand has employed following the earthquakes in the beginning of the year have allowed price pressures to creep in the economy. This data will prove significant for the week ahead.

Looking ahead to next week, there are a few data releases that are likely to further boost the Kiwi against the other major currencies. First, trade balance data is due ahead of the Asian session on Tuesday. Although a softer trade balance is expected, this is purely the result of a stronger Kiwi; a stronger domestic currency makes goods less appealing to foreigners, as it reduces foreigners’ purchasing powers. The most important release of the week comes on Wednesday, however, when the Reserve Bank of New Zealand meets to opine on the key interest rate.

At its last meeting the Reserve Bank of New Zealand held its key benchmark interest rate at 2.50 percent for the third consecutive period, on the outlook that the economy has been steadily improving. Similarly, it is widely expected that the key rate will be kept at 2.50 percent at the next monetary policy meeting on July 28, with the Credit Suisse Overnight Index Swaps showing a mere 6.0 percent chance of a 25.0-basis point rate hike. Still, despite such weak expectations, the number of basis points priced into the Kiwi over the next 12-months, 94.0, has boosted the New Zealand Dollar since mid-March. In spite of such a strong domestic currency, recent data releases indicate that the economy is undergoing robust growth and inflation has risen faster than expected. GDP growth figures released on July 13 came in at 1.4 percent, blowing past a forecast of 0.5 percent growth, while recent inflationary data showed inflation increasing to 5.3 percent, topping expectations of 5.1 percent, on a year-over-year basis. As rates are expected to remain on hold, commentary following the decision will be key for the New Zealand Dollar. -CV