To read the full Japanese Yen forecast, including the technical outlook, download our new 4Q trading guide from the DailyFX Free Trading Guides!

Recommended by Daniel Dubrovsky
Download the FullJPY Q4 Forecast!
Get My Guide

The anti-risk Japanese Yen wrapped up a fairly steady third quarter against the similarly behaving US Dollar, failing to achieve much progress in either direction. USD/JPY climbed slightly at the end of Q3. JPY saw cautious gains against the sentiment-sensitive Australian and New Zealand Dollars. This was likely a reflection of global stock market jitters.

Given that both the Yen and Greenback exhibit haven-oriented characteristics, USD/JPY tends to spend more time focusing on monetary policy differences between the United States and Japan. One way to gauge this is by looking at government bond yields. On the chart below, USD/JPY closely tracks the spread between US and Japanese 5-year government bond rates.

The road ahead for USD/JPY will likely be skewed to factors influencing US monetary policy rather than Japanese policy. Relative to the Federal Reserve, the Bank of Japan is more likely to keep policy unchanged in the near term as Japan faces softer inflation. Japan’s core inflation rate was -0.2% y/y in August. The US equivalent was 4.0% y/y in August, above the central bank’s target. 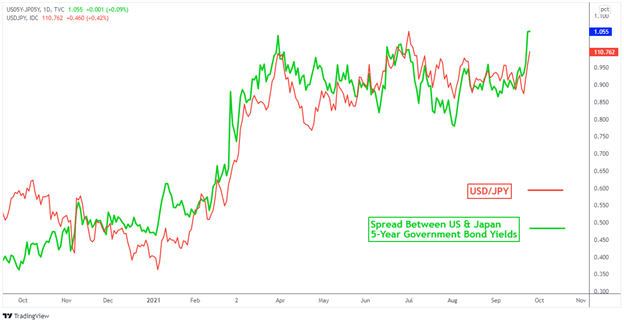 Will USD/JPY Resume the Early 2021 Uptrend?

While monetary policy seems to favor USD/JPY strength, there remain uncertainties in the fourth quarter. The Fed continues to closely monitor the labor market, which could sour if the Delta variant dampens sentiment. GDPNow – a more immediate estimate of growth from the Atlanta Fed branch – was materially revised lower for the third quarter.

Still, the Fed’s updated economic projections saw the Core PCE rate forecast boosted to 2.3% in 2022 from 2.1% in June 2021. Should price pressures remain elevated as growth slows, the Fed could end up in a sticky situation. Fighting inflation likely means raising interest rates sooner than expected. That may come at the cost of economic growth.

Chair Jerome Powell’s commentary hinted at completing quantitative easing tapering by the middle of 2022. Should this look possible, there could be room for near-term USD/JPY weakness. In the long run however, this could set the pair up for more preferable risk-reward scenarios to the upside as the Fed likely raises rates before the BoJ.

A wildcard is Japanese fiscal policy. In the third quarter, Japan’s Prime Minister Yoshihide Suga dropped plans to run for re-election as leader of the LDP. The move paved the way for a likely general election in November, and raised prospects of accompanying fiscal stimulus. It is unclear if an election would meaningfully alter the BoJ’s course.

To read the full Japanese Yen forecast, including the technical outlook, download our new 4Q trading guide from the DailyFX Free Trading Guides!

Recommended by Daniel Dubrovsky
Download the FullJPY Q4 Forecast for the Technical Outlook!
Get My Guide