Japanese Yen May Be Less Comfortable Than It Now Appears

The Japanese Yen’s ties to global risk appetite have seen it gain in the past week as global trade and growth fears mount again, but there’s still reason to suspect that the currency might not prosper into year-end.

For one thing the very pace of the slowdown seen in much economic data may add an urgency to trade negotiations which had previously been lacking. Equity markets’ obvious fragility could do the same.

It’s now very obvious from the numbers that both China and the US could really use at very least an interim trade settlement, with the recent slide in US manufacturing only underlining the point. Such a thing would boost risk appetite and weigh on low-yield havens like the Yen. Central bank stimulus is also likely to be ramped up, to similar effect.

Moreover, the Japanese currency has been unable to hope for much domestic monetary policy support for many years now. Not only is that most unlikely to change anytime soon, it could become more acute. Japanese inflation has slowed to an annualized rate of just 0.3%. The Bank of Japan’s ‘sustained 2%’ target looks as unreachable as ever and will all-but certainly requite yet more stimulus to shore up. This will render the Yen unattractive in all but the most straightened global circumstances, but the BoJ is committed to doing so under its current mandate nevertheless.

Of course, risks may yet mount, trade talks may fail and central banks may underwhelm. But the Yen may not be as comfortable as it now looks. 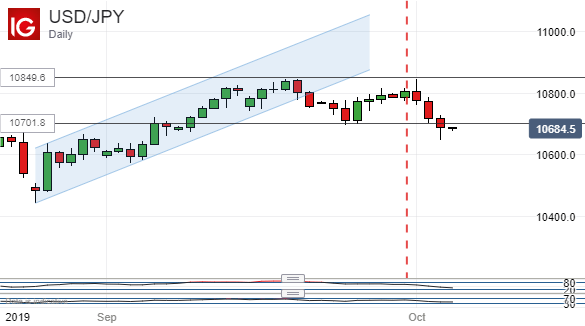 The Yen has gained on the US Dollar as the fourth quarter has got under way, but there’s a way to go yet.