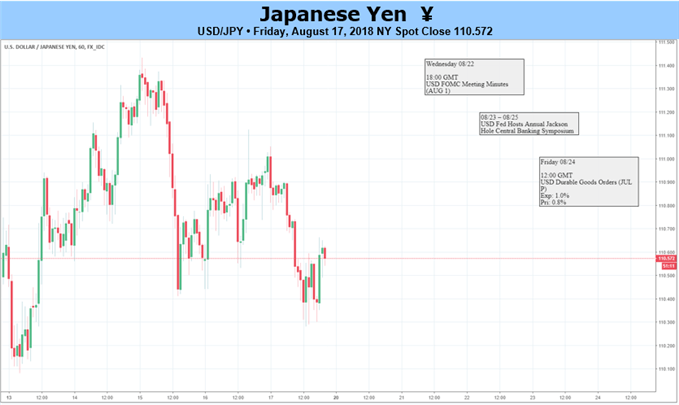 USD/JPY: Risk Aversion Keeps a Bid Behind the Yen, Inflation Data on Deck

Fundamental Forecast for the Yen: Neutral

- Near-Term Setups in EUR/USD and USD/JPY.

The Japanese Yen continues to hold strength as we move through the middle of August, and this is a theme that’s been rather visible so far throughout 2018. As we came into the year, the prospect of stronger rates of inflation pushing the BoJ away from their uber-loose monetary policy kept a bid behind the Yen, with buyers helping to reverse years of Abe-nomics fueled weakness.

This can be driven back to Japan’s continued saga with inflation. In 2012, current Prime Minister Shinzo Abe re-emerged in the nation’s top political seat, largely on a campaign built around solving the decades-long struggle with deflation and the economic weakness which came along with it. Shinzo Abe’s ‘three pillars’ approach towards economic policy helped to bring about three years of Yen weakness, with USD/JPY rising from a pre-Abe area from below 80.00 to as high as 125.00 in the summer of 2015. But later in the summer of 2015 is when another theme began to re-emerge, and that was weakness in China, which helped to spike risk aversion around the world.

As risk aversion flows heated up in latter-2015 and the first half of 2016, Yen strength remained as a rather constant theme. This didn’t begin to reverse until the US Presidential Election, at which point the Yen showed some very visible weakness for the next three months before finally topping-out again. Since then – its largely been an exhibition of Yen strength, as can be evidenced from the descending trend-line on the chart below that held the highs in USD/JPY for the most of the next 18 months.

As we came into Q3, USD/JPY broke out as Yen weakness began to re-emerge again. This was largely on the basis of inflation falling-back below 1%, removing the worry that the BoJ may soon be nearing their own announcement of stimulus taper. This got another wind of life in early-August at the Bank of Japan rate decision, as the BoJ made tweaks to their policy outlay to afford more flexibility moving forward.

But in the follow-up release of those meeting minutes, we learned that a rift is beginning to grow within the BoJ; and then we also learned that the bank had previously discussed the prospect of rate hikes in late-2018 should inflation continue to rise. It didn’t, so rate hikes aren’t really a concern at this point, but the fact that the BoJ was so ready to act in response to rising prices helps to show that the bank may not be as dovish as we had previously expected. Since then, its largely been an exhibition of strength in the Yen, and USD/JPY has re-approached the vaulted psychological 110.00 level.

Next week’s economic calendar brings the release of Japanese inflation numbers for the month of July, and this indicator has been drawing down after the earlier-year spike. Should we get another declining read, we could see a blip of weakness re-develop in the Yen; but the bigger question is whether or not this will be enough to offset the potential for strength that could come from continued risk aversion.

Japan Headline Inflation: Falls Back Below 1% After Earlier-Year Spike 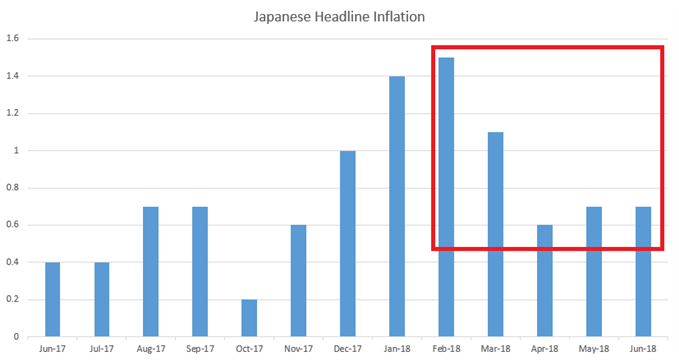 Risk Aversion Flows in the Yen

The elephant in the room of global markets at the moment is the prospect of more risk aversion. We’ve seen some concern flow into markets around the developing scenario in Turkey, but the question of global impact is a valid one. There is some negative exposure in Europe, in particular Spain, but how much might this stoke global risk aversion should this theme continue to develop? US stocks have remained largely bullish over the past week, and this removes a bit of worry from the prospect of a full-scale collapse.

But – with a very valid reason for capital to flow out of the Euro and with the US Dollar already at yearly highs, the Japanese Yen could be a very attractive ‘safe haven’ to ride out the storm, and this is likely a reason why the Yen has been stronger than the US Dollar over the past few weeks as this situation has continued to develop. This could keep Yen strength as an attractive theme, especially against European counterparts; but against the US Dollar, the question of trend will still remain until prices in USD/JPY either break-below 110.00 or above the 111.50 swing high. Until then – the forecast for JPY will remain at neutral.