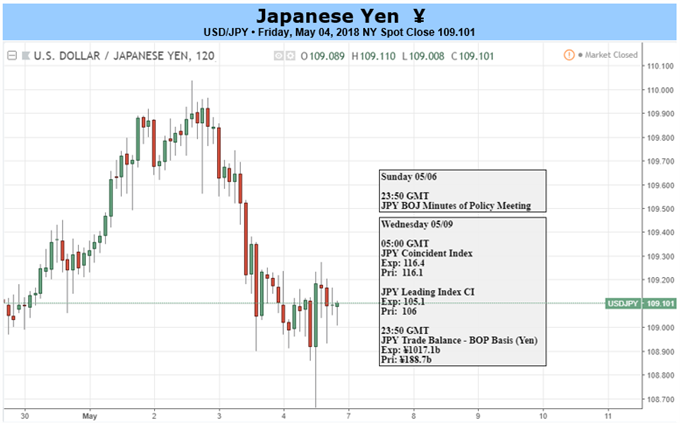 As expected, the Japanese Yen swung against its US cousin last week. First, USD/JPY rose to a February 5 high and then came down to where it started at the beginning of the week by Friday. That was partly driven by initial US Dollar strength ahead of the FOMC monetary policy announcement. Then, comments from Iran’s Foreign Minister soured sentiment, boosting the anti-risk currency. More of the same trading dynamic seems ahead.

A status quo Bank of Japan, which dropped the statement on the timing of reaching 2 percent inflation around fiscal year 2019, makes for what will most likely be tepid Yen reaction to local economic data as usual. However, we will get the BoJ’s Summary of Opinions on the April monetary policy announcement on Wednesday. There may be some more details to be had there on inflation estimates.

On the external front, we do have April’s US inflation report on Thursday. There, the headline rate is expected to tick up to +2.5% y/y. In May’s rate decision, the Fed upgraded its views on CPI. Rising price pressures may boost the US Dollar broadly speaking and bode-ill for its Japanese counterpart. The catch here is that if sentiment declines on tighter credit expectations, then gains could be limited against the Yen if the latter also rallies.

The same situation could also be said when looking at Fed member commentary next week. On Tuesday, Chair Jerome Powell will speak at an SNB/IMF event in Zurich. Then, Atlanta’s Fed President Raphael Bostic will offer s speech on the economic outlook and monetary policy. If both of these policymakers echo recent relatively hawkish outlooks, then the Yen could balance between USD gains and how stocks behave as they did last week.

Finally, the deadline for US President Donald Trump to extend sanction waivers on Iran is May 12. Lately, the chances of such an outcome have been reduced as Iran’s Foreign Minister Mohammad Javad Zarif said that the country won’t renegotiate the nuclear deal. If risk trends take another turn for the worse on the doubt of the outcome, then the Yen could gain. Taking this into consideration, this pinch of uncertainty makes the Japanese Yen look attractive and the fundamental forecast will reflect that as such. The call will have to be bullish.