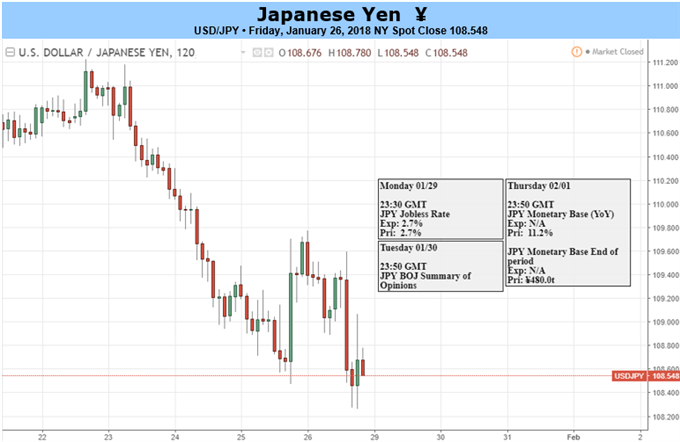 USD/JPY extends the decline from earlier this month, with the pair at risk of testing the 2017-low (107.32) as the Federal Open Market Committee (FOMC) is widely expected to retain the current policy at its first meeting for 2018.

The FOMC may merely attempt to buy more time as ‘some participants observed that there was a possibility that inflation might stay below the objective for longer than they currently expected,’ and more of the same from Fed officials may keep dollar-yen under pressure as market participants scale back bets for an imminent rate-hike. 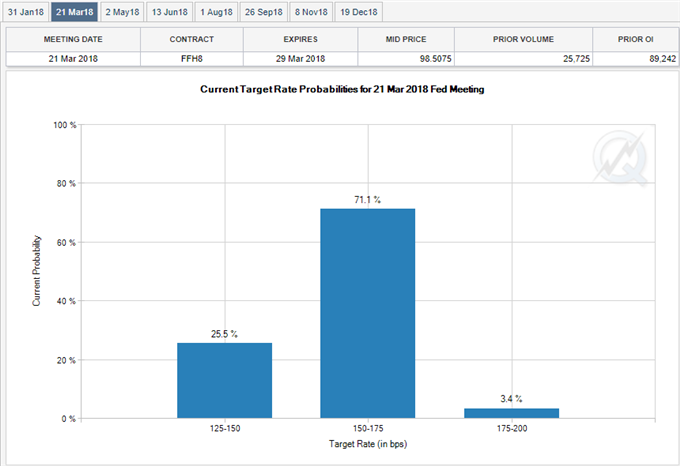 However, the central bank may utilize Chair Janet Yellen’s last meeting to prepare U.S. households and businesses for higher borrowing-costs as ‘tightness in labor markets was likely to translate into an acceleration in wages.’ In turn, a batch of hawkish comments may spark a bullish reaction in the greenback as the FOMC appears to be on course to further normalize monetary policy over the coming months.

Keep in mind, the U.S. Non-Farm Payrolls (NFP) report is also due out next week, with employment anticipated to increase 183K in January, while Average Hourly Earnings are projected to pick up during the same period. Hawkish Fed rhetoric paired with signs of stronger job/wage growth may generate a rebound in USD/JPY, but recent price action keeps the near-term outlook tilted to the downside as the pair snaps the range from earlier this month, while the Relative Strength Index (RSI) flashes the most extreme reading since 2016. Interested in having a broader discussion on current market themes? Sign up and join DailyFX Currency Analyst David Song LIVE for an opportunity to discuss potential trade setups! 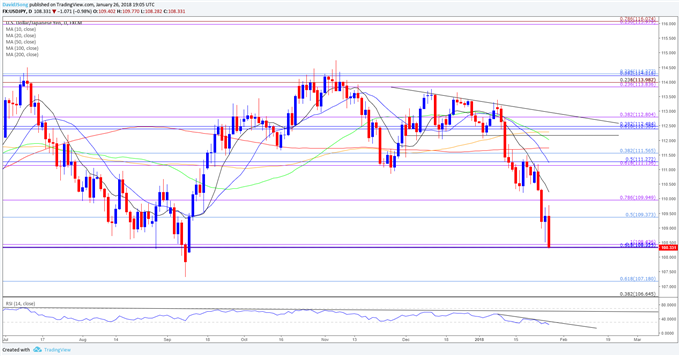 Downside targets remain on the radar for USD/JPY as the bearish momentum appears to be gathering pace, with the pair at risk of extending the recent series of lower-lows as the RSI pushes deeper into oversold territory. Waiting for a closing price below the 108.30 (61.8% retracement) to 108.40 (100% expansion) region to open up the next downside hurdle around 106.70 (38.2% retracement) to 107.20 (61.8% retracement), which sits just beneath the 2017-low (107.32).Interested in trading? Review the ‘Traits of a Successful Trader’ series on how to effectively use leverage along with other best practices that any trader can follow.