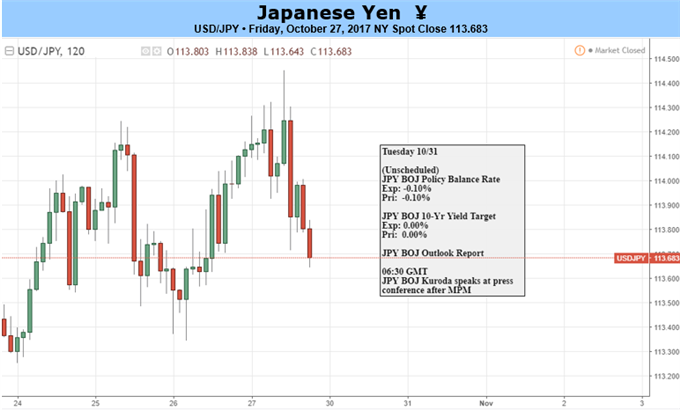 Dovish BoJ to Continue Priming the Pump; Will JPY Respond?

The Yen put in a week of strength against most major currencies, running higher against the Euro, British Pound and Canadian and Australian Dollars. And while the Yen did weaken against what turned out to be a very strong U.S. Dollar, an area of resistance in USD/JPY tempered the top-side move, leaving the five-month old range in place ahead of next week’s Bank of Japan rate decision. 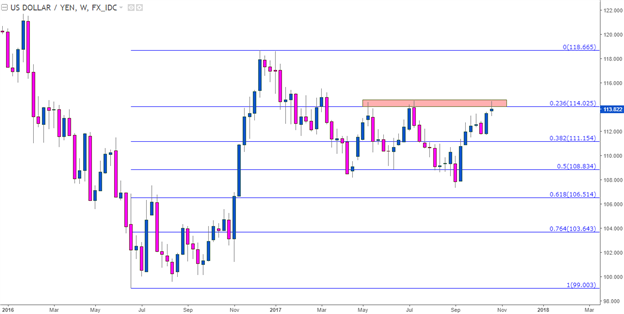 At next week’s meeting, there are few hopes for any actual moves. The one prospect of change on the horizon is a potential nudge-lower to near-term inflation forecasts. In a Bloomberg report earlier in the week, ‘people familiar with the Central Bank’s discussions’ implied that the BoJ may be considering a “small” cut to their inflation projections for this fiscal year, which ends in March of 2018. The current projection of 1.1% has started to look like quite the stretch: August saw inflation come in at a surprising .7%, but this was after four consecutive months of CPI coming in at a .4% clip in a year that saw inflation remain below .5% for a full twelve months.

The BoJ cutting inflation forecasts is becoming quite normal for the bank. They lasted nudged their forecast-lower in July, and this was the sixth time that the bank had pushed back their target for returning inflation to 2%; which they’re currently not expecting to happen until 2020. So, there is little expediency within the bank to investigate stimulus exit or tighter policy options, as the BoJ is still trying to foster an environment in which prices can rise at a faster rate for the aging nation. At the BoJ’s most recent rate decision, we saw little motivation for the BoJ to start looking at tightening; and we actually saw a dissenting vote looking for even more accommodation.

Against that trend of Yen weakness, we still have the brewing situation around North Korea. While fears around the further development of this scenario have started to recede behind the headlines, it would be unwise to completely discount the possibility of this re-emerging. The prior risks that were held around Japanese General Elections have dissipated after Shinzo Abe’s LDP carried a decisive win; and this opens the door for a continued backdrop of softness as driven by ‘ultra-loose’ monetary policy, as was at the center of Mr. Abe’s campaign along with BoJ Governor, Haruhiko Kuroda.

While the prospect of continued weakness on a dovish BoJ remains attractive, the lack of seller anticipation in a backdrop seemingly accommodative of such, as we had this week with USD-strength showing vividly, provides near-term questions around that scenario. Those questions can be soundly answered should Yen-sellers show up around or after next week’s BoJ meeting, but until then - the forecast for the Japanese Yen will be set to neutral for the week ahead.