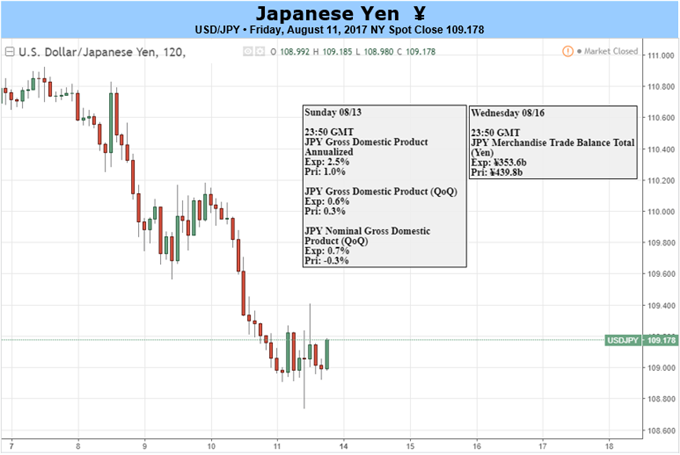 This week saw the Japanese Yen strengthen against most major currencies as risk aversion began to show across global markets. The noteworthy event for this week was USD/JPY falling below the key level of 110.00, and as we move towards the close of the week it appears as though prices will post their first weekly close below this zone since mid-April. This is an important psychological level for USD/JPY, and just ten pips below we have a key Fibonacci level at 109.90: The fact that prices were able to break and stay below this area is confluent zone of support notable, and will likely carry bearing into next week as markets’ focus shift towards a series of high-impact economic prints around-the-globe.

The big driver for the Yen has appeared to be one of risk aversion. On Tuesday, around Noon Eastern Time, U.S. President Donald Trump sent a tweet that triggered fears around the U.S. stand-off with North Korea regarding the DPRK’s nuclear ambitions. Shortly after this tweet was sent, risk assets like the S&P 500 and the Nasdaq 100, as well as Nikkei futures began to dip-lower. USD/JPY mirrored this movement, as Yen strength began to show and continued through the week and into Friday. The logic for why this correlation exists and why it played out this way is fairly logical: With the Bank of Japan being one of the ‘more dovish’ of the major Central Banks, the expectation is for the BoJ to remain pedal-to-the-floor with stimulus well into the end of Haruhiko Kuroda’s tenure next April. This backdrop produces a fairly comfortable environment for carry trades, as a very weak Yen with little hope of higher rates or tighter policy is used to finance positions in higher-yielding instruments, such as the U.S. Dollar. But if the prospect of losses on the trade eclipse that of the potential gain from the carry, traders are wise to ‘unwind’ those positions out of fear, aka, risk aversion; and this is what we’ve seen through this week. 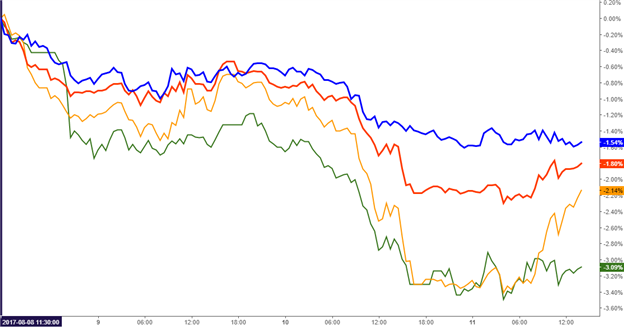 In relevance to the Bank of Japan, it would appear as though markets are still holding the expectation for a continued dovish stance. At July’s BoJ rate decision, the bank offered fresh forecasts that downgraded inflation expectations yet again. The bank now does not expect to reach their 2% inflation target until 2019 (fiscal year 2020 for the BoJ). This has kept markets behind the expectation that the BoJ is nowhere near cutting back on their massive stimulus outlays, as the nation’s decades-long struggle with dwindling inflation continues after a quick blip of hope in 2014 was soundly erased.

Next week brings 2nd Quarter GDP out of Japan, and this will be released on Monday Morning (Sunday evening in the U.S.). The expectation is for an annualized 2.5% print, and this would be above the BoJ’s 1.8% expectation for GDP growth this year, which was increased at that last rate decision while inflation forecasts were cut-lower. While we could certainly see some Yen volatility around this data point, more likely the bigger push for the currency for next week will emanate from the larger overall global risk aversion theme. Should markets remain on edge, as driven by jitters around the U.S.-North Korea situation, Yen strength will likely remain: Should those fears abate, Yen weakness could be an extremely attractive venue to fade this recent run of risk aversion.

USD/JPY will probably remain a tricky vehicle around this theme. The U.S. Dollar remains heavily oversold, and while prices ran down to set a fresh four-month low after this morning’s CPI print, buyers showed-up to offer a bit of support at the lows, and this was able to hold into the latter portion of the U.S. session. We discussed two different ways of approaching the Yen regarding this recent rise of risk aversion in an article on Thursday; and traders looking to buy Yen under the anticipation of continuation can look to GBP/JPY while traders looking to fade the move can investigate EUR/JPY. This would allow traders to take advantage of prevailing market themes in Euro and GBP in order to more properly position their stances around the Japanese Yen.

The fundamental forecast for next week will remain at neutral for JPY, and traders will likely want to pick their spots accordingly for positioning-in to Japanese Yen exposure.