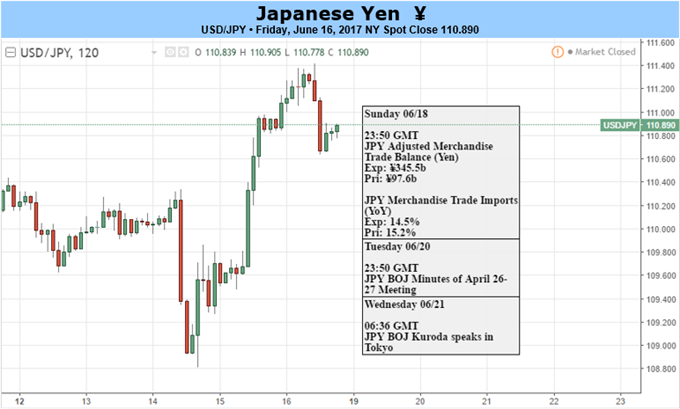 Waning risk sentiment may tame the near-term rebound in USD/JPY as the Yen largely retains its role as a funding-currency, but fresh remarks from Federal Reserve and Bank of Japan (BoJ) officials may encourage a long-term bullish outlook for the exchange rate amid the deviating paths for monetary policy.

With market participation likely to remain light throughout the summer months, the global benchmark equity indices may continue to consolidate over the near-term, and the dollar-yen exchange rate may exhibit a similar behavior especially as the new updates coming out of the Federal Open Market Committee (FOMC) fail to boost interest-rate expectations. Even though Fed officials see the benchmark rate climbing to a fresh threshold of 1.25% to 1.50% by the end of 2017, the 10-Year U.S. Treasury Yield remains depressed and trades near the 2017-low (2.1013), while fed fund futures highlight a less than 50% probability for a December rate-hike.

As a result, the 2017 voting-members (New York Fed President William Dudley, Chicago Fed President Charles Evans, Vice-Chair Stanley Fischer, Dallas Fed President Robert Kaplan and Fed Governor Jerome Powell) scheduled to speak next week may respond by striking a more hawkish outlook for monetary policy, and the central bank may show a greater willingness to start unloading the balance sheet later this year as the U.S. economy approaches full-employment. At the same time, remarks from Governor Haruhiko Kuroda may help to limit the downside risk for USD/JPY as the central bank head emphasize the BoJ ‘will debate an exit strategy only after 2 percent inflation is achieved and price growth stays there stably,’ and the Japanese Yen may continue to broadly track changes in market sentiment as the majority remains in no rush to move away from the Qualitative/Quantitative Easing (QQE) Program with Yield-Curve Control. 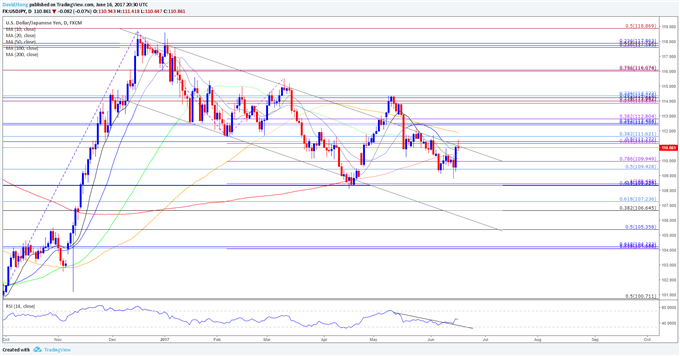 Nevertheless, the recent developments in the Simple Moving Averages (SMA) suggest USD/JPY may face a period of low volatility as the indicators flatten out, and the lack of momentum to clear the monthly opening range lead to choppy price action as market participants mull the timing of the next Fed rate-hike. Check out the Quarterly DailyFX Forecasts for additional trading ideas. 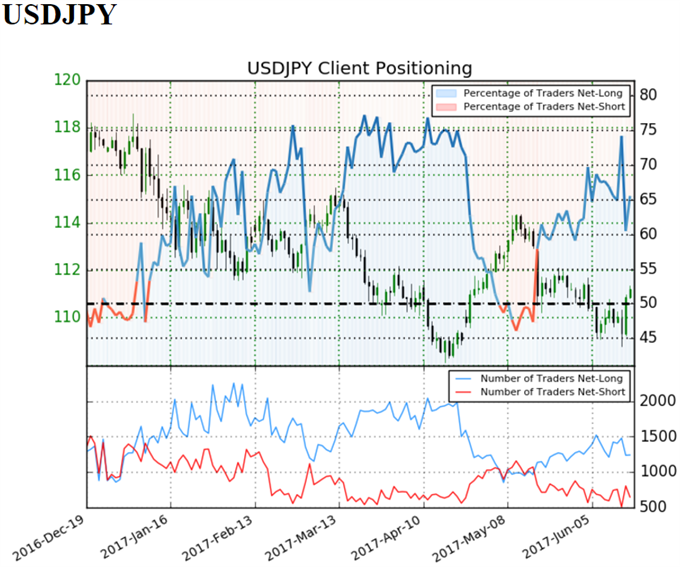 Retail trader data shows 65.6% of traders are net-long USD/JPY with the ratio of traders long to short at 1.9 to 1. In fact, traders have remained net-long since May 17 when USD/JPY traded near 113.298; price has moved 2.2% lower since then. The number of traders net-long is 2.4% lower than yesterday and unchanged from last week, while the number of traders net-short is 2.2% higher than yesterday and 11.0% lower from last week.For more information on retail sentiment, check out the new gauge developed by DailyFX based on trader positioning.