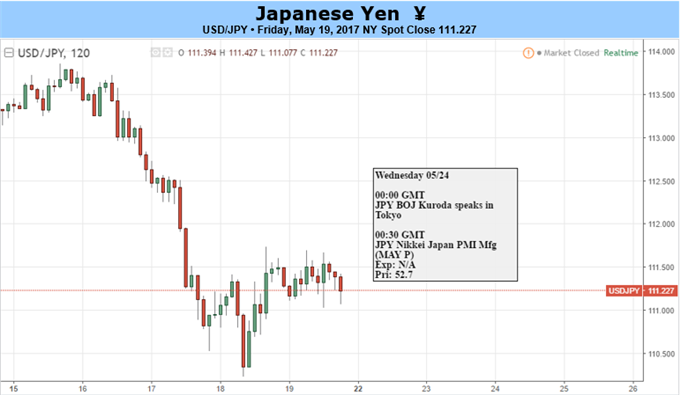 • Net short Yen exposure gained traction this past week, falling behind the USD/JPY’s most recent downdraft

USD/JPY witnessed its first decline in six weeks this past week. That said, an equally-weighted index of the major Yen crosses shows significant volatility but a measured advanced through Friday’s close. Nevertheless, it seems all that is needed to stir the market from its deeply-held sense of complacency in a bout of indigestion on lofty market valuations. The extremely low return on carry trades is struggling to keep pace with a general unease with the possibility of capital losses in risk trends. While there looms a range of both domestic and global event risk in the coming week, the focus is likely to default to general evaluations of sentiment. For event risk, data and standard events will likely defer to the influence of a few key gatherings among global policy makers.

In the range of known events moving forward, it is mainly the foreign meetings for the US President Donald Trump that carry the most weight. The divisive US leader will start his week with a visit to the Middle East. That can help foster a reversal in global relationships and perhaps thaw global trade to the benefit of the Japanese business sector which has found itself on the skirts of discussions about countries that can be labeled as using unfair trade practices (mainly currency devaluation through policy). The true potential for global risk trends however rests with the President’s presence at the NATO and G7 summits. For the former defense group, regular threats by the US leader to renegotiate its dues has put pressure on globalization which has materially helped countries like Japan heavily dependent on their shipment of goods abroad.

The more definitive threat to quiet, directionless Yen crosses is the G7 gathering late into the week. If grievances are to be aired and critical trade relations – like those between Japan and the US or the US with all others – come under pressure, the Japanese currency will find itself judged for its funding currency status. Should concern about the health of the global markets and economy develop via trade relationship concerns or any other catalyst; USD/JPY, EUR/JPY and AUD/JPY among others will likely drop quickly. This move is often confused as a preference for the Yen as a safe haven, however that is not the most palatable interpretation for most. Instead the practical need is the reduction of highly leveraged (notional and thematic) trends. Carry trade unwind is far more frequently a motivation for the market.

For event risk over the coming week, there is plenty to occupy traders’ minds – though it will general struggle for lasting influence. Among domestic issues, the most effective driver should it face a surprise would be the Japanese CPI figures. There are two ways to change appeal for a specific rate – either risk appetite succumbs to aversion or the yields themselves change to lift or lower the expected income. For Japanese data, the consumer inflation statistics are the obvious absentee for an eventual rate hike. Japan’s proxy for monthly GDP updates in the PMI figures will touch on the growth aspect of monetary policy motivation – not exactly the most pressing of absences given the performance of GDP figures. It will be important to follow risk trends and technical patterns to keep accurate tabs on the Yen pairs next moves.