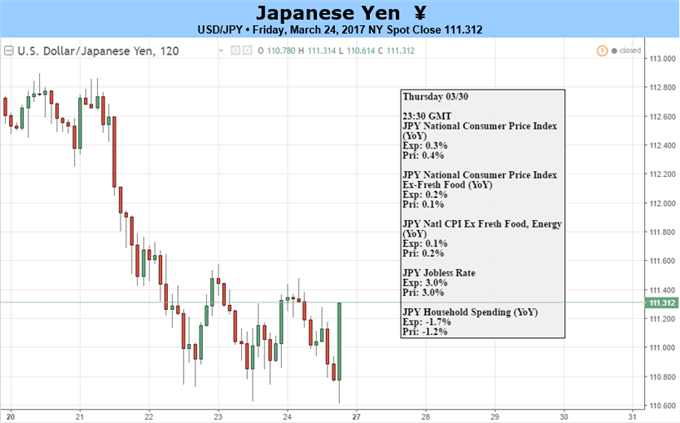 After marking the longest stretch of losses since 2011, USD/JPY may stage a near-term recovery going into Japan’s 2016 fiscal year-end as Federal Reserve officials are scheduled to speak throughout the final week of March. 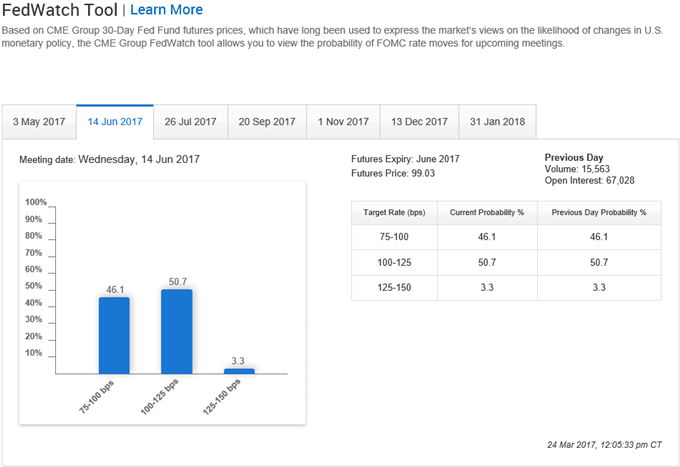 However, the developments following the March rate-hike suggests the recent weakness in the greenback may carry into the month ahead as Fed officials tame market expectations and continue to forecast a terminal fed funds rate close to 3.00%. In turn, more of the same rhetoric may fail to impact the near-term outlook for the dollar-yen exchange rate as the central bank is widely anticipated to retain the current policy at the next interest rate decision on May 3. Moreover, the gridlock in Washington may continue to produce headwinds for the dollar and weigh on risk appetite with Fed Fund Futures now pricing a less than 60% probability for a June rate-hike.

Indeed, the bar appears to be high for central bank officials to boost the interest rate forecast as Chair Yellen argues ‘inflation moved up over the past year, mainly because of the diminishing effects of the earlier declines in energy prices and import prices,’ and the central bank may attempt to buy more time as ‘market-based measures of inflation compensation remain low; survey-based measures of longer-term inflation expectations are little changed, on balance.’ With that said, growing uncertainties surrounding the fiscal outlook may continue to foster fresh 2017-lows in USD/JPY even as the Bank of Japan (BoJ) continues to pursue its Quantitative/Qualitative Easing (QQE) Program with Yield-Curve Control. 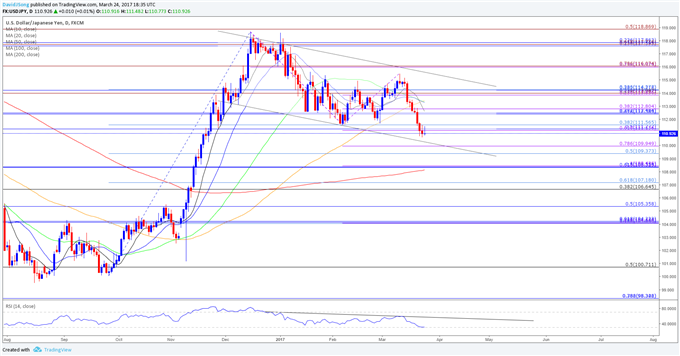 USD/JPY stands at risk of facing further losses as it continues to operate within the downward trending channel carried over from the end of 2016 and threatens the near-term support zone around 111.30 (50% retracement) to 111.60 (38.2% retracement). However, the decline appears to be to be losing momentum ahead of channel support, with the Relative Strength Index (RSI) highlight a similar behavior as it fails to kick into oversold territory. A key turn in the oscillator may be accompanied by a larger rebound in the dollar-yen exchange rate, with the first topside hurdle coming in around 112.40 (61.8% retracement) to 112.80 (38.2% expansion). - DS