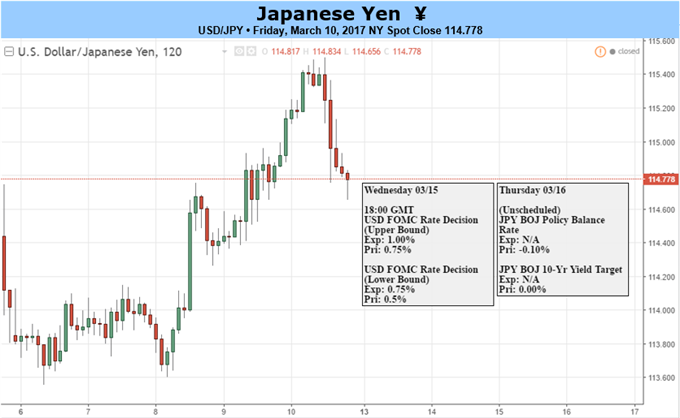 USD/JPY stands at risk of facing increased volatility over the coming week as the Federal Open Market Committee (FOMC) is widely expected to deliver a March rate-hike, while the Bank of Japan (BoJ) continues to pursue its Quantitative/Qualitative Easing (QQE) Program with Yield-Curve Control. 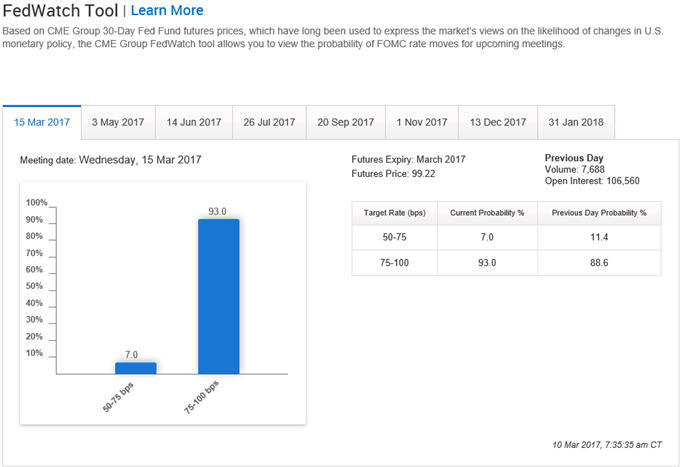 Even though the U.S. dollar failed to benefit from the 235K expansion in U.S. Non-Farm Payrolls (NFP), Fed Fund Futures are still pricing a greater than 90% probability for a 25bp rate-hike. Indeed, an adjustment in the benchmark interest rate may spark a near-term advance in the greenback as the central bank pledges to implement higher borrowing-costs throughout 2017, but the U.S. dollar may face a knee-jerk reaction as market participants gauge the future pace of the normalization cycle.

With Fed officials scheduled to release their update projections, more of the same may prop up the dollar as the central bank remains confident in achieving the 2% inflation-target over the policy horizon. Nevertheless, the most bearish scenario for the greenback would be a further reduction in the longer-run interest rate forecasts as it undermines the recent uptick in U.S. yields. The central bank may tame expectations for a series of rate-hikes and outline a more shallow path for the fed funds rate as officials persistently warn ‘market-based measures of inflation compensation remain low; most survey-based measures of longer-term inflation expectations are little changed, on balance.’ As a result, the central bank may try to buy time especially as Chair Janet Yellen argues ‘inflation moved up over the past year, mainly because of the diminishing effects of the earlier declines in energy prices and import prices.’

With that said, the BoJ interest rate decision may generate limited market interest as Governor Haruhiko Kuroda notes ‘there is not much likelihood that we will further lower the negative rate,’ and the central bank may continue to endorses a wait-and-see approach for monetary policy as officials monitor the impact of the non-standard measures on the real economy. However, Governor Kuroda and Co. may keep the door open to further embark on the easing-cycle as they struggle to achieve the 2% target for price growth, and the diverging paths may continue to foster a long-term bullish outlook for USD/JPY especially as the BoJ strives to keep the 10-year yield close to zero. 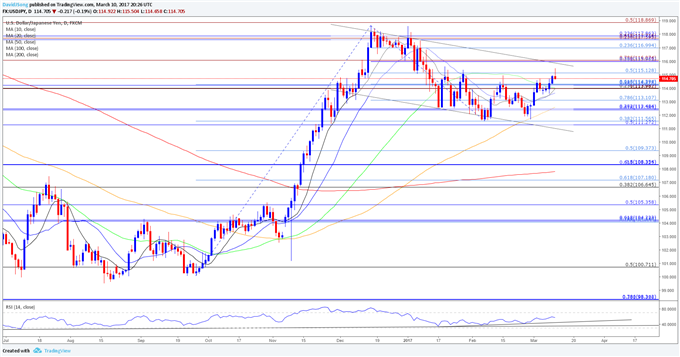