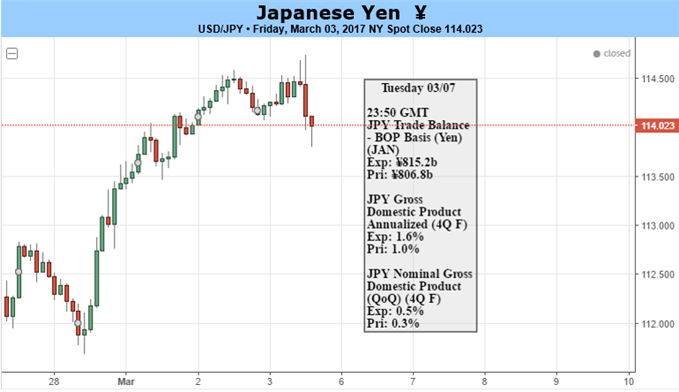 USD/JPY may continue to retrace the decline from earlier this year as a growing number of Fed officials highlight a hawkish outlook for monetary policy, with U.S. Non-Farm Payrolls (NFP) projected to increase another 190K in February. 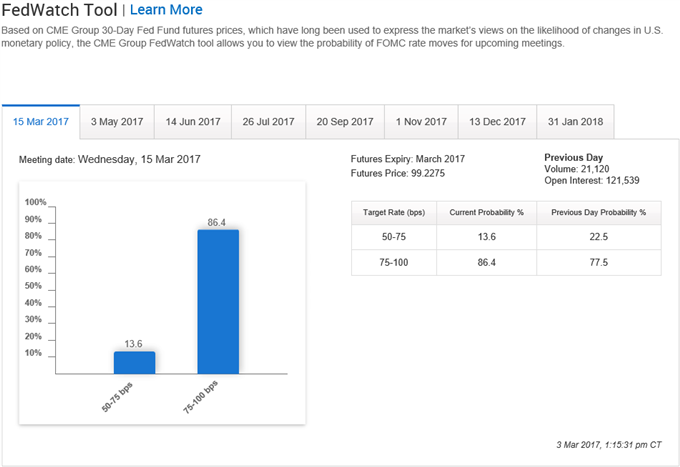 Recent rhetoric coming out of the Federal Open Market Committee (FOMC) have sparked a material shift in interest rate expectations, with Fed Fund Futures now pricing a greater than 80% probability for a March rate-hike. In turn, faster job growth accompanied by a pickup in Average Hourly Earnings may heighten the bullish sentiment surrounding the greenback and push the Fed to normalize monetary policy sooner rather than later especially as the economy approaches ‘full-employment.’ Indeed, Chair Janet Yellen joined her colleagues and noted a March hike would be ‘appropriate’ as long as the U.S. economy stays on track, and the 2017 voting-members appear to be on course to implement higher borrowing-costs throughout 2017 as the central bank head warns the ‘process of scaling back accommodation likely will not be as slow as it was during the past couple of years.’

However, Chair Yellen concluded that ‘a gradual removal of accommodation is likely to be appropriate,’ and it seems as though the central bank may tame the broader outlook for monetary policy as ‘market-based measures of inflation compensation have moved up, on net, in recent months, although they remain low.’ With Fed officials scheduled to release their updated projections in March, the fresh estimates may reflect minor changes to the growth and inflation forecast, but a further reduction in long-run Fed Fund forecast may drag on market expectations and undermine the recent strength in the U.S. dollar.

Nevertheless, the bar remains high for the Bank of Japan (BoJ) to move away from its easing-cycle as inflation remains well below the 2% target, and Governor Haruhiko Kuroda and Co. may continue to endorse a dovish outlook at the March 16 interest rate decision as the Balance of Payment (BoP) report is anticipated to show a trade deficit in January. The deviating paths for monetary policy continues to instill a long-term bullish outlook for USD/JPY, and the BoJ looks poised to further expand its balance sheet as the central bank pledges to keep the 10-year yield around zero. 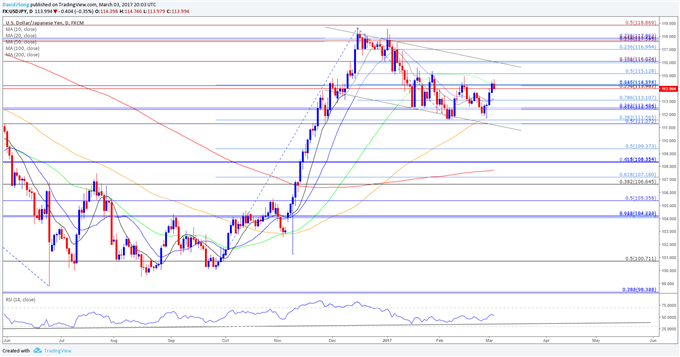 Failure to clear the February high (114.96) may cap the recent advance in the dollar-yen exchange rate and foster range-bound conditions ahead of the FOMC and BoJ meeting on tap for later this month. However, the recent series of higher highs & lows keeps the near-term outlook tilted to the topside, with a break/close above the 115.10 (50% retracement) hurdle opening up the next topside target around 116.00 (38.2% retracement) to 116.10 (78.6% expansion). - DS