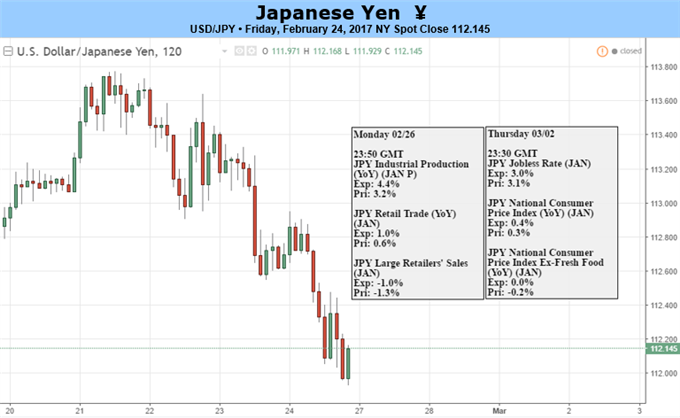 Kuroda Stokes Bullish Motivation in the Yen; CPI on Deck

Forecast for the Yen: Bullish

One of the biggest beneficiaries of the ‘Trump Bump’ across global markets was Japan. After the BoJ spent more than three years weakening the Yen as part of ‘Abe-nomics,’ disaster began to show as the Yen started to re-strengthen around the same time that the Chinese economy began to wobble in the summer of 2015. Matters began to really disintegrate for the Bank of Japan with the turn of the New Year into 2016: Risk aversion enveloped capital markets and investors rushed into the Yen in preparation for bumpier days ahead. This brought along the threat of undoing 3+ years, and more than $4 Trillion spent through the various conduits of Japanese QE. The BoJ just knew that something had to be done: Looking across the East China Sea showed a growing economy that was appearing to stumble with a very real and legitimate chance of a ‘blow up’, which likely would’ve led to Yuan weakness as Chinese investors looked for safer harbors. One of the safest harbors in the world during times of Financial Tumult? The Japanese Yen.

So at the BoJ’s rate decision in January of 2016, they shocked the world by enacting negative rates. This caught capital markets completely by surprise, and perhaps even denoted a tone of distress, as the BoJ was taking a radical, highly-untested action without any form of warning or public debate. And this worked. For about a day. The BoJ made this move on a Friday morning in Japan (Thursday night in the States, Early Friday Morning in Europe), and the Yen weakened as we rolled into the weekend. But the following Monday was brutal, as Yen strength came-back with a vengeance, and lasted for about six months as USD/JPY shed over 20%. The net result of the BoJ’s move to negative rates was that the bank scared investors so much that any tangible benefit of their move was wiped out in about 36 trading hours.

The Yen was pervasively strong until the election of Donald Trump. The ‘Trump Bump’ that enveloped global markets in the seven weeks after the Presidential Election drove the Yen lower as USD/JPY ran-up by as much as 17.2% from the election-night lows. But it’s not only the Yen that’s enjoyed the ride – the Nikkei moved up by as much as 22.3% from those same election-night lows. That’s more than 1/5th of value – added to a very major equity index – in three months. As we wrote last month ahead of the BoJ’s most recent rate decision, the bank was likely going to want to wait for more-confirmed signs of recovery before making any additional moves.

This may be starting to show through BoJ commentary. Bank of Japan Governor Haruhiko Kuroda dropped a bombshell of a quote on Wednesday of this week when he said that the chance of any additional rate cuts in the near-term was low, noting the continued improvement in inflation. He hedged this statement a bit when he later said that the BoJ is standing by to ease further if needed, and this very much connects to Mr. Kuroda’s comment from the week before in which he said further interest rate cuts will be the bank’s primary tool for handling economic weakness. These comments, taken collectively, would indicate that the Bank of Japan is getting more optimistic about the tone of their continued recovery, which could further this current spate of Yen strength.

The big item on the calendar for next week is January CPI, set to be released on Thursday evening (Friday morning in Asia, Europe). Due to the uniqueness of the Japanese economy, the bank follows a few different gauges of importance. There is the ‘all items’ index, which is basically just headline CPI, including all relevant products in the followed basket. But Core CPI in Japan (this is what the BoJ targets) includes Oil products while stripping out the more volatile fresh food items. And then there is the ‘All items, less food and energy’ (this would be similar to a traditional ‘Core CPI’ reading from another economy in Europe or the United States). The expectation for next week’s CPI read is that we’ll finally see Core CPI flatten out after declining for 10 consecutive months, further adding fuel to that recent theme of improvement that’s helped Mr. Kuroda take a slightly less-dovish stance to markets. A Core inflationary read anywhere above 0% will likely stoke additional Yen-strength, as bets for more monetary stimulus further price-out of Japanese markets.

The forecast for the Japanese Yen will be set to bullish for the week ahead, as that previously strong factor (or threat) of additional monetary stimulus out of the BoJ is looking considerably less-likely as inflation continues to recover, and as global risk assets continue their ascension.