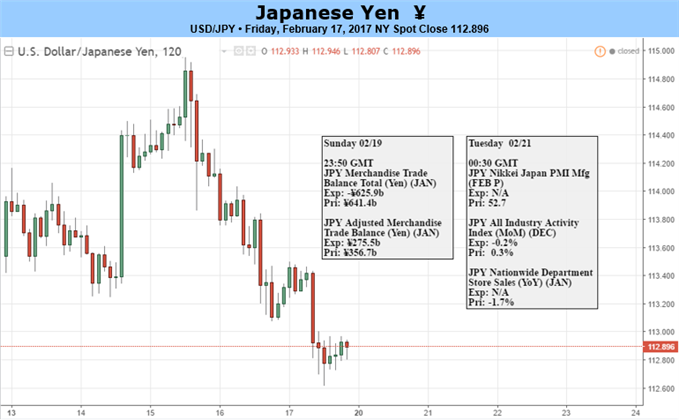 Headlines coming out of the G20 meeting may yield a limited reaction in USD/JPY as the group of global finance ministers strive to avert a currency war, and risk trends may continue to influence the dollar-yen exchange rate over the remainder of the month as both the Federal Reserve and Bank of Japan (BoJ) largely endorse a wait-and-see approach for monetary policy.

The broader outlook for the U.S. dollar remains constructive as the Federal Open Market Committee (FOMC) appears to be on course to further normalize monetary policy in 2017, and Chair Janet Yellen and Co. may continue to prepare U.S. households and business for higher borrowing-costs especially as the U.S. economy approaches full-employment. As a result, the recent pickup in the U.S. Consumer Price Index (CPI) may encourage the central bank to lift the benchmark interest rate sooner rather than later, but the remarks from the Humphrey-Hawkins testimony suggests Chair Yellen is in no rush to implement another rate-hike as the central bank head argues ‘inflation moved up over the past year, mainly because of the diminishing effects of the earlier declines in energy prices and import prices.’

With that said, the 2017 FOMC voting members (Minneapolis Fed President Neel Kashkari, Philadelphia Fed President Patrick Harker and Fed Governor Jerome Powell) schedule to speak in the week ahead may strike a similar tone to Chair Yellen, and the fresh rhetoric may do little to alter the interest rate outlook as Fed Fund Futures continue to highlight limited expectations for a March rate-hike, with market participants still pricing a greater than 60% probability for a move in June. The FOMC Minutes may share a similar and fail to prop up the greenback as officials expect ‘the evolution of the economy to warrant further gradual increases in the federal funds rate,’ and more of the same rhetoric may produce range-bound conditions in the exchange rate, with the pair with the pair at risk of giving back the advance from earlier this month as risk appetite abates.

The recent decline in USD/JPY appears to be tracking a similar pattern in the Nikkei 225, with the benchmark equity index also at risk of testing the monthly opening range following the failed attempt to test the 2017 high (19,698). The quantitative/qualitative easing (QQE) program with Yield-Curve Control should continue to prop up market sentiment as the Bank of Japan (BoJ) intends to further expand the monetary base, but Governor Haruhiko Kuroda and Co. may closely watch the operations at the European Central Bank (ECB) especially as the Governing Council plans to reduce its asset-purchases to EUR 60B/month starting in April. The BoJ may find itself in a similar situation as officials warn any fluctuations in its purchases of Japanese Government Bonds (JGB) will be temporary, but the BoJ seems inclined to retain the status quo for the foreseeable future as it struggles to achieve the 2% target for inflation. The wait-and-see approach by both the FOMC & BOJ may foster range-bound conditions over the near-term, but the deviating paths for monetary policy instills a long-term bullish outlook for USD/JPY, with the pair still operating within bull-flag formation carried over from the previous year. 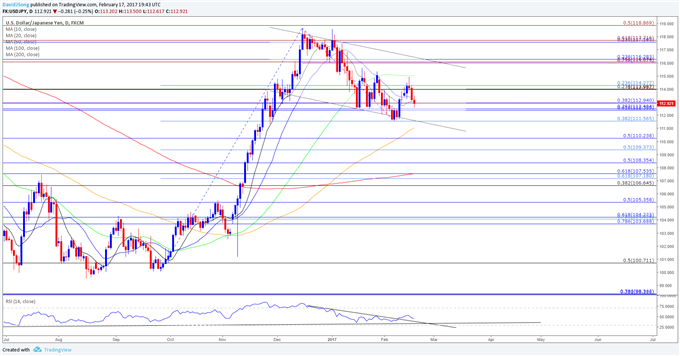 USD/JPY stands at risk of extending the recent series of lower highs & lows following the failed run at the late-January high (115.58), with a break/close below 112.40 (61.8% retracement) to 112.50 (38.2% retracement) opening up near-term support around 111.60 (38.2% retracement), which lines up with monthly opening range. Nevertheless, the development in the Relative Strength Index (RSI) suggests the weakness will be short-lived as the oscillator breaks out of the bearish formation from late-December, and the dollar-yen may stage a larger advance over the coming weeks/months as Fed officials continue to endorse two to three rate-hikes for 2017. 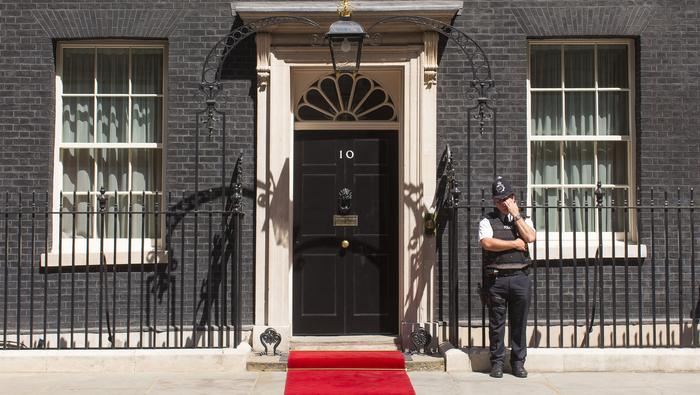