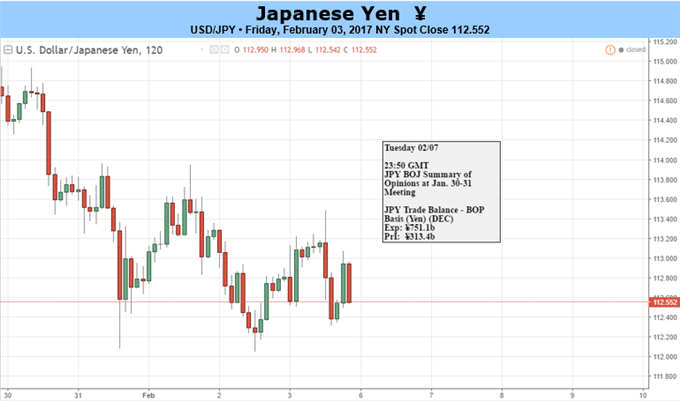 Japanese Yen Volatility Ahead as the BOJ, Financial Markets Clash

What does retail traders’ positioning say about the Yen trend? Find out here!

The Japanese Yen enjoyed the best performance in six months last week as worries about US fiscal policy uncertainty continued to stoke haven demand and investors questioned Bank of Japan’s ability to deliver stimulus. The yield on 10-year government bonds (JGBs) – which the BOJ aims to keep at “about zero” – rose to 0.1 percent, the highest in a year.

BOJ policymakers seem to understand that their credibility is at stake. When a routine purchase of ¥450 billion in 5-10yr JGBs underwhelmed investors and yields jumped higher, the central bank leapt into action to beat them back down. Markets will continue to test officials’ resolve however, bidding yields upward to see just how much firepower they are prepared to engage.

History is replete with examples of markets humbling central banks that thought they could prevail in similar circumstances. The SNB’s unceremonious retreat from defending a floor on the EURCHF exchange rate and the BOE’s now-infamous inability to keep the Pound within the European Exchange Rate Mechanism (ERM) are just two of the more prominent instances that come to mind. This bodes ill for the BOJ.

With that said, timing a capitulation is notoriously difficult. It may be months or even years before the central bank is forced to throw in the towel. In the meantime, the on-going tug of war between the authorities and market participants is likely translate into rising Yen volatility. Price action may also become increasingly erratic, making for treacherous trading conditions.

The ongoing guessing game about the likely impact of Donald Trump’s still-murky economic policy can complicate matters further. JGB yields rose alongside their US counterparts in the aftermath of last year’s presidential election as investors reckoned the incoming administration’s planned fiscal stimulus will boost inflation and push up global borrowing costs as the Fed tightens.

That dynamic fizzled once the calendar turned to 2017. Details on the pro-growth elements of the Trump agenda remained scarce even as the President pursued objectives that always made investors uneasy, including trade barriers and an escalation of geopolitical tensions. The landscape remains very much in flux however and the unveiling of a generous dose of government largesse can rekindle the so-called “Trump trade”.

JGB yields may accelerate upward if this happens, intensifying the BOJ vs. markets standoff. With that in mind, the Yen’s path in the week ahead is as likely to be decided in Washington, DC as it is in Tokyo. A relatively quiet week on the relevant economic data front offers few distractions, leaving simmering market tensions to their own devices.