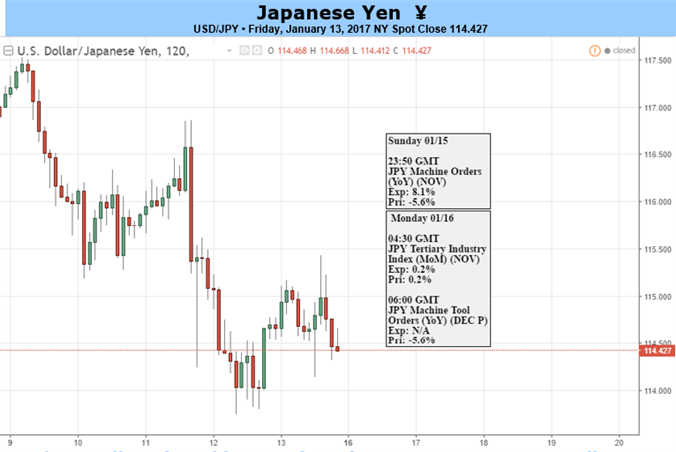 The failed run at the December high (118.66) keeps the near-term outlook for USD/JPY tilted to the downside, but the key developments coming out of the U.S. economy may prop up the exchange rate next week especially as the Federal Reserve appears to be on course to further normalize monetary policy in 2017.

The U.S. Consumer Price Index (CPI) may get increased attention this time around and spark a bullish reaction in the dollar as the headline as well as the core reading for inflation are both projected to pick up in December. Indeed, signs of stronger-than-expected price growth may push the Federal Open Market Committee (FOMC) to further prepare U.S. households and businesses for higher borrowing-costs as officials warn ‘the near-term forecast for consumer price inflation was somewhat higher than in the previous projection.’

Fresh comments from New York Fed President William Dudley, Minneapolis Fed President Neel Kashkari, Chair Janet Yellen and Philadelphia Fed President Patrick Harker may also heighten the appeal of the greenback as the 2017-voting members are scheduled to speak over the days ahead, and the group of central bank officials may endorse a more hawkish outlook for monetary policy as ‘‘the staff's forecast for real GDP growth over the next several years was slightly higher, on balance, largely reflecting the effects of the staff's provisional assumption that fiscal policy would be more expansionary in the coming years.’ In turn, Fed Fund Futures may continue to highlight bets for a June rate-hike, with market participants currently pricing a greater than 60% probability for a move ahead of the second-half of the year, but more of the same from central bank officials accompanied by another set of mixed data prints may drag on interest rate expectations and generate a more meaningful pullback in USD/JPY.

That said, USD/JPY stands at risk of staging a larger pullback, with the downside in focus for the days ahead as the pair continues to search for support. The failed test of the December high (118.66) may gain increased interest as a double-top formation appears to be taking shape, and we will keep a close eye on the Relative Strength Index (RSI) as it fails to preserve the upward trend carried over from the summer months and flashes a bearish signal.