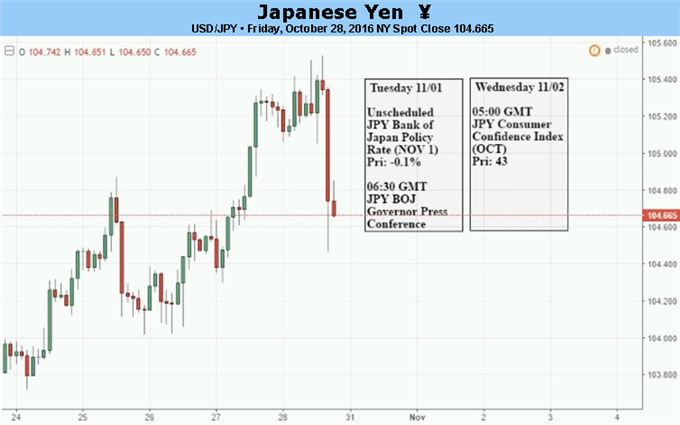 The Federal Open Market Committee’s (FOMC) November interest rate decision may fuel the near-term rally in USD/JPY as the central bank appears to be following a similar path to 2015, but more of the same from the Bank of Japan (BoJ) accompanied by another lackluster U.S. Non-Farm Payrolls (NFP) report may undermine the recent advance in the exchange rate as it erodes the case for a further deviation in monetary policy.

The FOMC is widely anticipated to retain the current policy ahead of the U.S. Presidential election on November 8, but the committee may make increased efforts to prepare households and businesses for a December rate-hike as ‘some participants believed that it would be appropriate to raise the target range for the federal funds rate relatively soon if the labor market continued to improve and economic activity strengthened.’ With NFP’s projected to increase 175K in October, the ongoing improvement in the labor market may spark a greater dissent within the Federal Reserve, but another 7 to 3 split to retain the current stance may ultimately dampen the bullish sentiment surrounding the U.S. dollar as central bank officials lower the long-run interest rate forecast and continue to warn ‘survey-based measures of longer-run inflation expectations were little changed, on balance, while market-based measures of inflation compensation remained low.’ With that said, the NFP report may have a larger impact in influencing the near-term outlook for the greenback especially as Fed Chair Janet Yellen and Co. remain in no rush to implement higher borrowing-costs.

At the same time, the BoJ may also stick to the sidelines as Governor Haruhiko Kuroda and Co. anticipate the non-standard measures (negative-interest rate policy & the quantitative/qualitative-easing program with ‘yield-curve control’) to help achieve the 2% target for inflation, but a material adjustment in the central bank’s forecast may further weaken the Japanese Yen should the committee push out its pledge in delivering price stability. In fact, the BoJ may have little choice but to look beyond the second-half of fiscal-year 2017 in reaching its inflation goal as the core-core Consumer Price Index (CPI) slipped to an annualized 0.0% from 0.2% in August, and the fresh batch of central bank rhetoric may drag on the local currency should the BoJ show a greater willingness to preserve the highly accommodative policy stance for longer. However, the recent depreciation in the Japanese Yen may largely unravel if the BoJ retains the status quo largely endorse a wait-and-see approach for monetary policy. 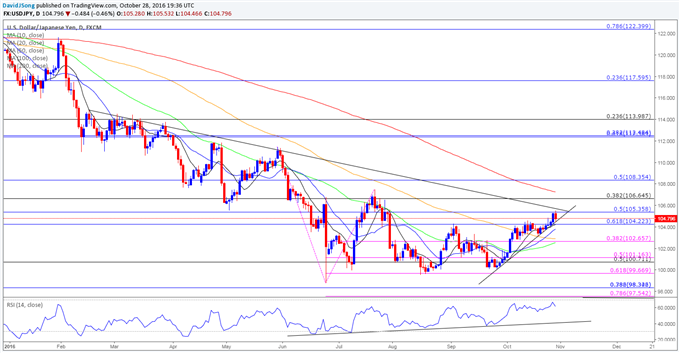 USD/JPY may continue to correct the decline from earlier this year amid the slew of failed attempts to close below 99.70 (61.8% expansion), and the pair may threaten the downward trend from earlier this year as it comes up against trendline resistance. In turn, a closing price above 105.40 (50% retracement) may open up the next topside target around 106.60 (38.2% retracement), but the Relative Strength Index (RSI) appears to be diverging with price as the oscillator fails to break above 70 and narrows from its recent highs.