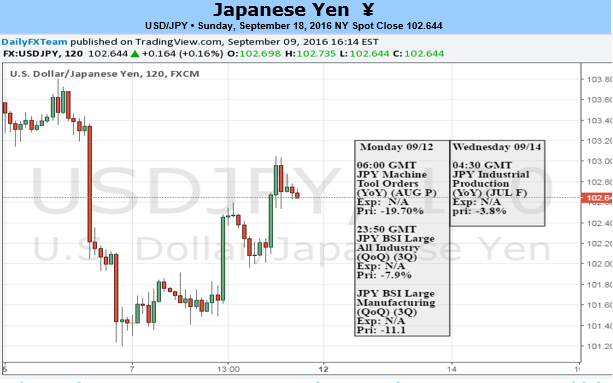 Has there ever Been a More Critical 12 Hours for the USD/JPY?

Has there ever Been a More Critical 12 Hours for the USD/JPY?

The Japanese Yen starts a critical week near the middle of its 3-month trading range, but surprises out of the Bank of Japan or US Federal Reserve could quite easily force the long-awaited USD/JPY breakout. Traders look to an especially pivotal 12-hour stretch starting with the highly-anticipated BoJ decision early Wednesday morning GMT and the US Fed later that evening.

The key question for the USD/JPY is straightforward: will either the Japanese central bank or its US counterpart finally break the deadlock and force worthwhile currency volatility?

A majority of analysts expect BoJ Governor Haruhiko Kuroda will announce fresh monetary policy easing in response to persistently low domestic inflation, and failure to do so would likely send the Japanese Yen considerably higher (USD/JPY lower). There is considerable uncertainty, however, in what forms any fresh easing might take and subsequent effects on the Yen exchange rate. Kuroda himself said drastic policy steps could be taken and there remains ample scope for interest rate cuts as well as unconventional types of policy easing. It is of course important to note policy rates are already negative and the bank’s so-called Quantitative and Qualitative Easing (QQE) policy is fast running out of securities to buy.

Many expect the Bank of Japan could cut short-term rates further into negative territory and do a so-called “reverse twist” where they focus on buying short-term debt in order to steepen the JPY yield curve. A flat yield curve—where short-term and long-term interest rates are the same—hurt bank profits and imply investors see little scope for higher growth and interest rates in the future. In other words, a steeper yield curve is better. But will artificial steepening prove beneficial? This is a much more difficult question to answer, and how the Japanese Yen might respond is even less clear.

Traders will have relatively little time to digest the Bank of Japan decision ahead of the critical US Federal Reserve’s rate announcement—likely prove the most market-moving event ahead of the US Presidential Elections in November. Here again there are a great range of potential outcomes, and whether or not the Fed hikes rates or strongly hints at future rate hikes may determine the US Dollar’s price trend.

It is subsequently little exaggeration to claim this is the week which will decide direction for the USD/JPY. The weight of expectations is riding especially high for the Bank of Japan, and if it fails to ease policy the JPY could move significantly higher. The bar is somewhat lower for the US Federal Reserve as interest rate traders predict a mere 20 percent chance of a rate hike. A surprise hike would almost certainly move the US Dollar higher, but the lack of a move will shift focus to Fed rhetoric and whether or not it might move at its December meeting.

There is everything to play for in a critical week for the USD/JPY exchange rate ahead. - DR