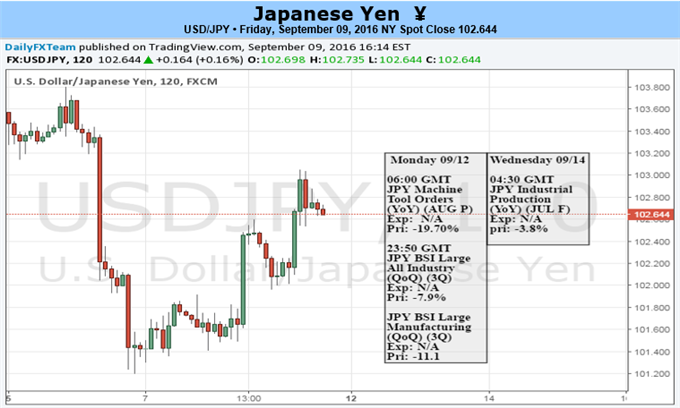 Despite forecasts for a 0.1% contraction in U.S. Advance Retail Sales, a pickup in the Consumer Price Index (CPI) accompanied by a rebound in the U. of Michigan Confidence survey may put increased pressure on the Federal Open Market Committee (FOMC) to raise the benchmark interest rate sooner rather than later especially as the central bank remains confident in achieving the 2% inflation-target over the policy horizon. With that said, hawkish remarks from Atlanta Fed President Dennis Lockhart, Minneapolis Fed President Neel Kashkari and Fed Governor Lael Brainard may boost the appeal of the greenback and fuel bets for higher borrowing-costs as Fed Funds Futures highlight a pickup in interest-rate expectations, with market participants now pricing a 30% probability for a September rate-hike. As a result, a greater number of 2016-voting members may join Kansas City Fed President Esther George and push for higher borrowing-costs later this month, but the U.S. dollar may face choppy price action ahead of the policy meeting as Chair Janet Yellen appears to be following a similar path to 2015, with market participants still heavily tilted towards a December rate-hike.

For Japan, the economic docket remains fairly light over the days ahead, with the BoJ entering the quiet period ahead of its next rate decision also on September 21, and the central bank may finally come off the sidelines as Japanese officials push for additional monetary support. Etsuro Honda, an advisor to Prime Minister Shinzo Abe, argued the BoJ should further on its easing cycle at the next meeting as the region continues to struggle with deflation. However, Governor Haruhiko Kuroda may continue to endorse a wait-and-see approach for monetary policy as the central bank officials prepare their ‘comprehensive assessment’ of the economy operating under the negative-interest rate policy (NIRP). In turn, USD/JPY may continue to trade within a broad range ahead of Fed/BoJ rate decisions as market participants gauge the diverging paths for monetary policy. 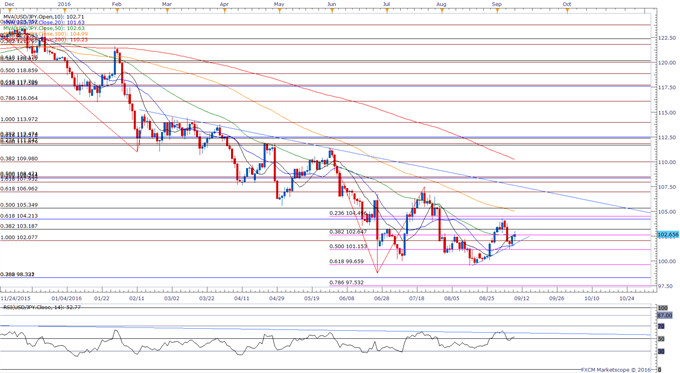 The near-term outlook for USD/JPY remains constructive as the pair maintains the upward trend carried over from the previous month, and the recent series of higher highs & lows may generate a test of the monthly opening range especially as the Relative Strength Index (RSI) shows similar dynamic. Nevertheless, the broader outlook remains tilted to the downside as it largely retains the downward trend from earlier this year, and the pair may struggle to preserve the rebound from the August low (99.53) should the Fed as well as the BoJ attempt to buy more time.