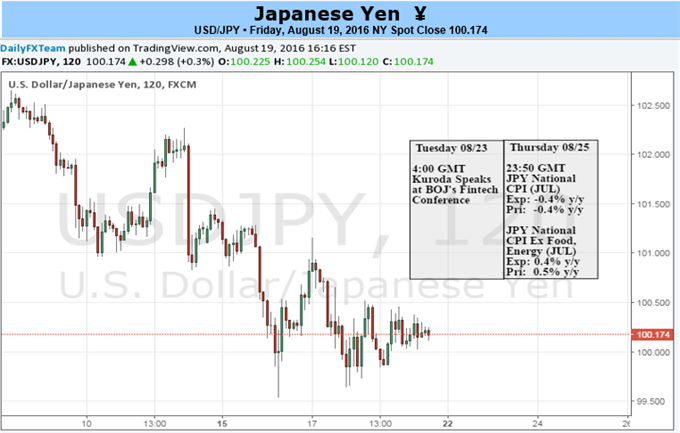 Clues and Hints Point to BoJ Bazooka in September: Will USD/JPY Respond?

- Traders and BoJ Watch as USD/JPY Lurks at 100

- If you’re looking for trading ideas, please check out our trading guides; and if you want something more short-term in nature, our SSI indicator may be able to help.

Last week we looked at the strength in the Yen as markets continued to price-out QE hopes after the Bank of Japan failed to deliver at their July meeting. But as we’ve been noting, just because the BoJ didn’t deliver on expectations in July, this doesn’t mean that the bank is yet ‘done.’ This is the same bank that’s triggered such radical policies like buying stocks with QE in October of 2014; and then making the surprising move to negative rates earlier in 2016. This type of risk assumption is emblematic of a Central Bank with their back against the wall. The fact that these moves so far have seemingly failed aren’t likely to make the BoJ more risk averse, and if anything, may trigger the opposite as the bank seeks new and inventive solutions to fight the decades-long saga of deflation in the Japanese economy.

The issue at the moment is that Japan may need to investigate another manner of QE, as the bank is running out of bonds to buy. After triggering a gargantuan bond-buying program in 2013, the Bank of Japan has been like a vacuum for Japanese Government Bonds. Many banks need these types of securities for collateralization, and as BoJ bond-buying has raged for the past three years many of these bonds have been moved to the ledger of the Bank of Japan. This additional demand has, of course, driven prices higher and yields lower; but the sleeping giant is the lower amount of liquidity in a key asset class that could, quite frankly, become extremely troubling should inflation or rates tick-up. As rates tick up and prices move lower, the lessened liquidity could exacerbate the ‘plunge’ in prices.

As of most recent data, the Bank of Japan owns 38.1% of the Japanese Government Bond market. Many banks are balking at selling more JGB’s as this can hamstring their own operations given a lack of securities that they can use as collateral for Central Bank and Interbank market transactions. And while this market share could increase, this would only expose deeper risk of the above scenario actually happening. This has led many to believe that the Bank of Japan might try to stem their asset purchases through Japanese Government Bonds.

But this is where matters get interesting… the September BoJ meeting may have been more optimal for that next announcement of an increase in stimulus all along. As we noted just two weeks ahead of that most recent BoJ rate decision, it seemed as though an extension in stimulus was just a matter of time, whether it was more QQE or the extremely-theoretical ‘helicopter money.’ And this echoes the comments from Mr. Shinzo Abe earlier in the summer in which he assured that a ‘comprehensive, bold economic stimulus package’ was coming this fall.

Thickening the plot around the upcoming September meeting are reports that the Bank of Japan has prepared a ‘comprehensive’ review of current QE policies. The expectation is that the bank is going to vigorously defend their QE-strategy , pointing the finger of their policies failures at exogenous factors like falling oil prices and slow growth after a sales tax hike in 2014.

And we’ve even heard from the head of the BoJ, Mr. Haruhiko Kuroda who alluded that investors ‘won’t be disappointed’ by the September review. And earlier today, an advisor to Shinzo Abe said that the Bank of Japan is likely to take ‘bold easing action’ at their meeting next month.

So, details continue to line-up for this upcoming September Bank of Japan meeting to be very, very interesting. The big question is when markets might actually begin to try to anticipate this weakening in the Yen, as the currency is continuing to trade near longer-term resistance levels against many major currencies, including the psychological ¥100.00-spot against the U.S. Dollar.

Given the risk-reward landscape of the Japanese Yen at the present, with significant strength likely to be isolated to extreme risk-aversion scenarios at which point down-side could be capped with stops situated around those levels of resistance, we’re initiating a bearish bias on the Japanese Yen for the week ahead.