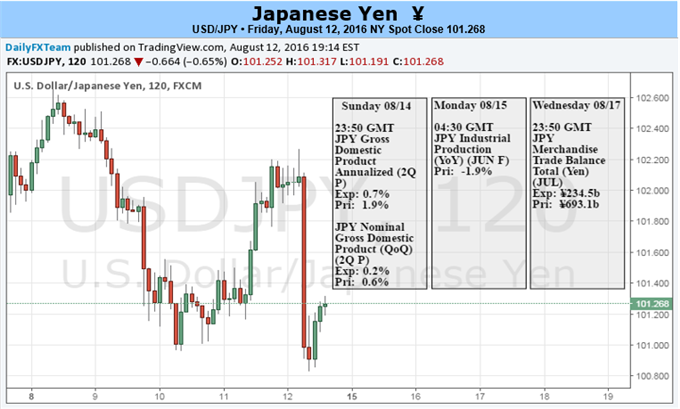 Yen Runs to Resistance as Stimulus Bets Continue to Price-Out

The Japanese Yen has been quite the volatile currency of recent. After the Brexit referendum drove the Yen to fresh highs as risk aversion permeated through global markets, a two-week bout of weakness in the currency threatened to pose a longer-term reversal on the prospect of an even more enhanced stimulus package coming out of the Bank of Japan. But when the BoJ disappointed in July, and later when the Japanese Government Budget indicated far less fiscal stimulus than originally hoped, those bets of Yen-weakness priced out of the market aggressively, driving the Yen towards the highs established in the Post-Brexit environment.

To be sure, there is one key driver here for Japanese Markets: Anticipation of stimulus. Sure, data points matter, but primarily in how they might motivate policy makers to mold future stimulus efforts. And after the BoJ failed to deliver the ‘comprehensive, bold’ package in July that many were looking for, interest and attention began to steer towards the bank’s next meeting in September. As we mentioned in the trading forecast last month, just two weeks ahead of that most recent BoJ decision, September may be more optimal to get that next BoJ announcement of increased stimulus. From our Yen forecast on July 15th:

And while we did get that continuation of a pricing-in of increased stimulus heading into the July meeting, much of that has been erased in the first half of August after the BoJ underwhelmed. But, is the Bank of Japan done? This is the same bank that’s embarked on some extremely experimental policy efforts already in the goal of fighting deflation; like buying stocks with QE in 2014 (which hasn’t worked out well at all) and then making the surprising move to negative rates earlier in the year. So the BoJ is comfortable taking on risks in economic policy as they’ve exhibited in the past, and this has many expecting the eventual delivery of ‘helicopter money.’ And while there are still some quandaries around the execution of such a policy, including whether or not ‘helicopter money’ would even be legal under current Japanese structure, what is clear is that the bank has not yet shown any signs of letting up on the stimulus front.

Next week brings a smattering of Japanese data points that could help shape odds around expectations future policy moves. The ‘big’ release for Japanese markets next week is the delivery of 2nd quarter GDP set to come out Monday morning in Japan (Sunday evening in New York), where the expectation is for a print of .2% quarter-over-quarter growth, or .7% annualized. These numbers are quite a bit lower than the previous prints of .6% and 1.9% respectively, and this further highlights the slowdown in the Japanese economy that is helping to build those expectations for more stimulus. Later in the week we get some slightly less-pertinent data points with finalized June Industrial Production numbers later on Monday morning, July trade numbers on Wednesday and then the ‘All Industry Activity Index’ on Friday morning (Thursday evening in New York).

But what could end up being more relevant than any of these numbers could be commentary from Japanese politicians, Finance Minister Taro Aso or BoJ Governor Haruhiko Kuroda that may indicate that more stimulus is in the pipeline. While such commentary is utterly unpredictable, the fact of the matter is that this has become a huge driver in financial markets, particularly in the QE-driven economies of Europe, the United States and of course, Japan.

On a technical basis, the Yen has found itself nudged-up to fairly strong resistance against many major currencies. USD/JPY, for instance, remains near the psychological level of ¥100.00, and this is likely at least somewhat resultant of the fact that other market participants are harboring the same expectation for even more stimulus from the Bank of Japan at some point in the near-future. This could continue to provide support unless any major themes of global risk aversion pipe-up, which, with the current state of the Chinese economy, remains as a risk moving-forward.

Due to this opacity of this scenario and further given the fact that the short-side of the Yen would seemingly be waiting for clues or innuendo ahead of that next phase of stimulus-driven Yen weakness, we’re setting the forecast on the Japanese Yen to neutral for the week ahead.