Japanese Yen May be Days Away from a Significant Break Lower 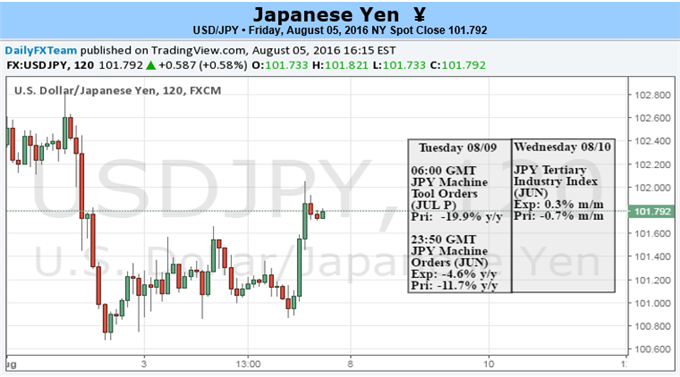 The Japanese Yen finished the week almost exactly where it began, but notable financial market volatility meant that USD/JPY price action was anything but straightforward. Yen volatility will likely continue on a highly-anticipated communique from the Bank of Japan in the days ahead, and indeed traders should exercise caution amid choppy price action in the USD/JPY.

Traders initially sent the Japanese Yen notably higher as newly-announced fiscal stimulus measure failed to meet lofty market expectations, but a blockbuster US labor market report sent the US Dollar sharply higher and erased most of the early-week JPY gains (USD/JPY losses). The theme of Japanese economic stimulus measures will remain the focus as the Bank of Japan releases its “Summary of Opinions” from its July 29 monetary policy announcement. The Yen surged following that July BOJ decision as the central bank’s fresh policy easing fell significantly short of market expectations. We will look for answers in the central bank’s official communique—particularly as it pertains to the future of policy easing.

The Bank of Japan is unquestionably in a difficult position as its aggressive quantitative easing policies to date leave it with little recourse to enact further stimulus; the BOJ’s balance sheet is a developed world-leading 85% of domestic GDP and growing. Yet domestic price inflation—the bank’s key target—remains below the official objective of 2.0 percent. The bank itself predicts that headline inflation will reach its target through fiscal year 2017. Yet the bank’s own economic paper almost humorously shows that consumers and businesses completely disagree; officials themselves are the only ones who believe inflation will hit targets.

Will BOJ Governor Kuroda point to further policy easing at the bank’s September meeting? Its July statement said the bank would perform a “comprehensive assessment” on the effectiveness of its inflationary monetary policies in September. Such a statement suggests that officials knew the July announcement would come as a disappointment. And yet officials’ reluctance to act more aggressively underlines their hesitation on further policy easing.

This uncertainty leaves Japanese Yen traders in a similarly difficult position. On the one hand, the threat of continued Bank of Japan stimulus should hurt the JPY (boost the USD/JPY). The flipside is that continued disappointments would have the opposite effect, and traders should be prepared for either outcome.

From a technical perspective, the USD/JPY looks at the precipice of a significant break higher as it holds key support. Whether or not that comes to bear may very well depend on the Bank of Japan’s statements this week, and traders should be prepared for notable volatility.