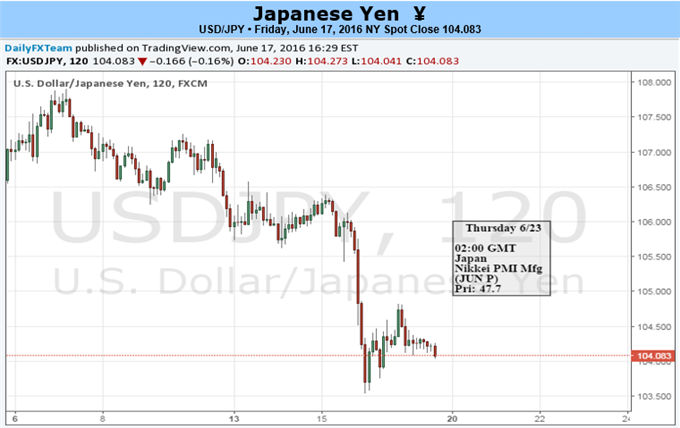 Beyond the U.K. Referendum, the semi-annual Humphrey-Hawkins Testimony with Fed Chair Janet Yellen may largely influence USD/JPY in the week ahead as market participants weigh the outlook for monetary policy.

Indeed, the Federal Open Market Committee (FOMC) appears to be on course to further delay its normalization cycle as central bank officials curb their growth outlook and project a more shallow path for the benchmark interest rate. Recent remarks by St. Louis Fed President James Bullard suggest the central bank remains in no rush to implement higher borrowing-costs as the 2016 voting-member sees one rate-hike over the policy horizon, and the FOMC may unanimously endorse a neutral stance over the coming months as the economic outlook remains clouded with high uncertainty.

In turn, Fed Funds Futures now show a less than 20% probability for a rate-hike in July, and market participants may continue to push out bets for higher borrowing-costs should Chair Yellen highlight a more cautious outlook in front of Congress. At the same time, waning demand for large-ticket items may further undermine Fed expectations for a ‘consumer-led’ recovery in 2016 as U.S. Durable Goods Orders are anticipated to contract 0.4% in May, and a weak data print may spur near-term headwinds for the greenback as it weighs on interest-rate expectations.

With that said, another leg lower in USD/JPY may fuel speculation for a currency intervention as Japanese officials favor a stable exchange rate, but the Bank of Japan (BoJ) may stick to the sidelines at the next interest-rate decision on July 29 as Governor Haruhiko Kuroda and Co. continue to monitor the impact of the negative interest rate policy (NIRP) on the real economy. As a result, the BoJ’s wait-and-see approach may continue to heighten the appeal of the Yen especially as Japan returns to its historical role as a net-lender to the global economy. 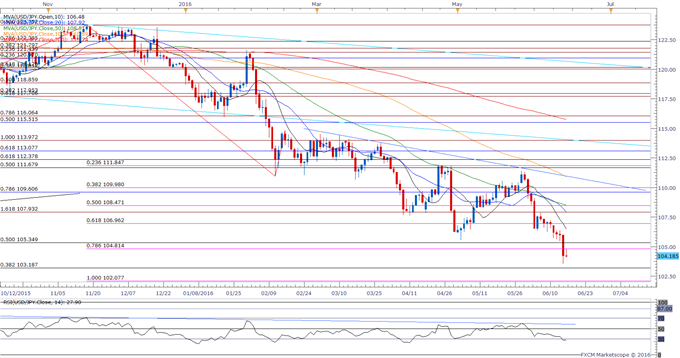 The failure to hold above near-term support around 104.80 (78.6% expansion) to 105.30 (50% retracement) raises the risk for a further decline in USD/JPY, and the pair stands at risk of carving fresh 2016 lows over the coming days as the bearish momentum gathers pace, with Relative Strength Index (RSI) slipping into oversold territory for the first time since April.