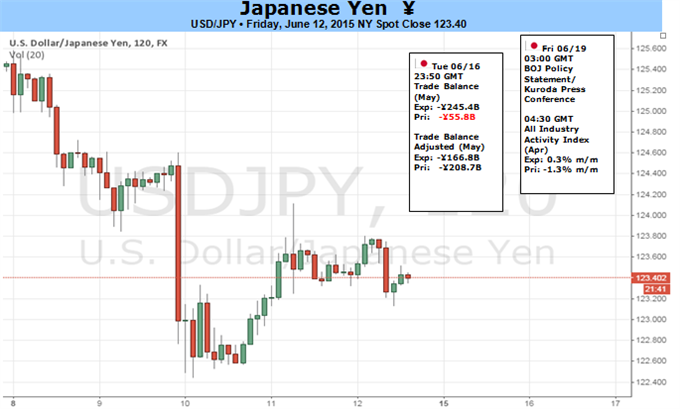 The fresh rhetoric coming out of the Federal Open Market Committee (FOMC) and the Bank of Japan (BoJ) interest rate decisions are likely to heavily impact USD/JPY next week as market participants weigh the outlook for monetary policy.

The FOMC policy meeting may heighten the appeal of the greenback as the central bank pledges to remove the zero-interest rate policy (ZIRP) later this year, and the updated forecasts may instill a bullish outlook for the reserve currency should the committee largely retain its call for a stronger recovery in the second-half of 2015. Growing speculation for a rate hike at the Fed’s September 17 meeting may spur a near-term rally in USD/JPY, but a shift in the interest rate outlook may generate increased headwinds for the dollar should the central bank layout a more gradual path to normalize monetary policy.

On the other hand, the BoJ may largely endorse a wait-and-see approach and retain its JPY 80T asset-purchase program as a growing number of central bank officials become increasingly confident in achieving the 2% target for inflation, and the Japanese Yen may face a larger correction over the near-term should Governor Haruhiko Kuroda talk down bets for a further expansion in the qualitative/quantitative easing (QQE) program. At the same time, it seems as though the BoJ is softening the verbal intervention on the local currency as the central bank head argues it will be hard to see the ‘real effective rate falling further,’ and we may see market participants scale back their bearish outlook for the Yen as Governor Kuroda turns increasingly upbeat on the economy.

As a result, the risk for a slower pace of Fed rate hikes paired with a more upbeat tone from the BoJ may produce some chop ahead of the key event risks, and the dollar-yen may face a larger pullback should the fresh batch of central bank drag on U.S. interest rate expectations. Nevertheless, the long-term outlook for USD/JPY remains bullish as Governor Kuroda and Co. looks poised to retain its easing cycle well beyond 2015. - DS