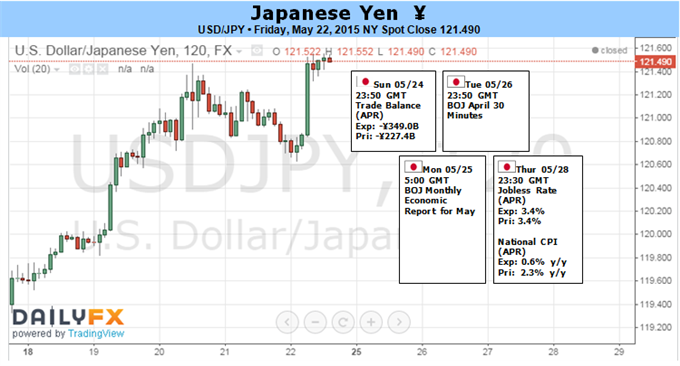 The near-term breakout in USD/JPY raises the risk for a run at the 2015 high (122.01), but the fundamental developments coming out of the world’s largest economy may undermine the bullish outlook surrounding the exchange rate should we see a growing number of Fed officials show a greater willingness to further delay the normalization cycle.

Speculation surrounding the Fed policy outlook may play an increased role in driving dollar-yen volatility as the Bank of Japan (BoJ) preserves a wait-and-see approach, and another series of dismal U.S. data prints may drag on interest expectations as the Federal Open Market Committee (FOMC) Minutes show a greater willingness to retain the zero-interest rate policy (ZIRP) beyond mid-2015. The preliminary 1Q U.S. Gross Domestic Product (GDP) report will be in focus going into the last full-week of May, and the updated print may dampen the appeal of the greenback as market participants anticipate a 0.9% contraction in the growth rate versus an initial forecast for a 0.2% expansion.

A marked downward revision in 1Q GDP may encourage the Fed to retain the ZIRP for an extended period of time, and we may see a growing number of central bank officials adopt a more dovish tone should the weakness from the beginning of the year carry into coming quarters. With FOMC voting-members Stanley Fischer, Jeffrey Lacker and John Williams scheduled to speak next week, the fresh batch of rhetoric may ultimately spur a near-term pullback in USD/JPY should the policymakers talk down bets for a September rate hike.

Nevertheless, the technical outlook highlights the risk for a test of the 2015 high as USD/JPY breaks out of the near-term range, and a more bullish formation may take shape in the days ahead should the U.S. developments highlight an improved outlook for the U.S. economy and beat market expectations.