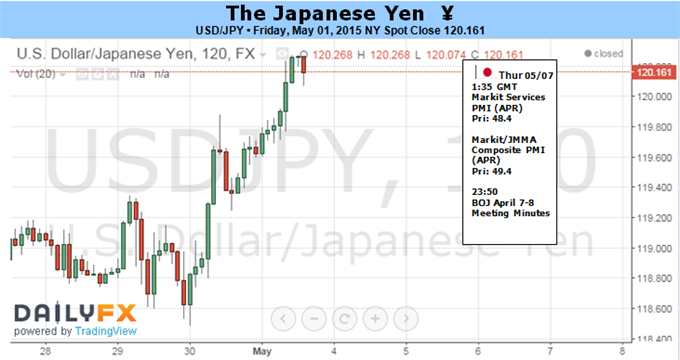 US Dollar May Finally Break Out versus Japanese Yen

The Japanese Yen finished the week notably lower versus the US Dollar but stuck to its long-standing trading range. A big week for FX markets ahead might be enough to finally force a break in the slow-moving US Dollar/Japanese Yen exchange rate.

A sharp US Dollar rally pushed the USD/JPY to fresh 8-year highs through March and yet the pair has consolidated ever since. It has been a virtual stalemate for the Dollar and the Yen as both the US Federal Reserve and Bank of Japan have given relatively little reason to force a fundamental shift for either currency. And indeed this past week’s uneventful monetary policy decisions from both the Fed and BoJ maintained the status quo.

Any surprises in the upcoming US Nonfarm Payrolls report could nonetheless tip the scales and force major US Dollar volatility, while monetary policy meeting minutes from the Bank of Japan might spark noteworthy moves in the Yen. The US labor market report is often one of the biggest market-movers not only for the US Dollar and domestic financial markets but global counterparts as well. The interest rate-sensitive Japanese Yen will almost certainly react to any surprises.

Current consensus forecasts predict that the US economy added 225k jobs in April after a disappointing March result. Recent US Dollar weakness suggests few expect a material improvement in US economic data, and a worse-than-expected print could force the Greenback even lower.

The Bank of Japan Meeting Minutes due just a day before are less likely to force major moves in the Yen. Yet it remains important to monitor the central bank’s rhetoric in regards to future monetary policy moves. BoJ Governoor Kuroda sounded a surprisingly neutral tone at a recent press conference as officials show no real willingness to ease monetary policy despite notable disappointments in economic data. Pressure is building on the BoJ to ease further as recent inflation figures showed a sharp pullback in year-over-year Tokyo CPI growth. And though this may not be enough to force the Bank of Japan’s hand in itself, it remains of clear interest to monitor officials’ next moves.

It’s shaping up to be a fairly important week for the Dollar versus the Yen, and any major surprises could finally be enough to force the USD/JPY out of its narrow trading range.