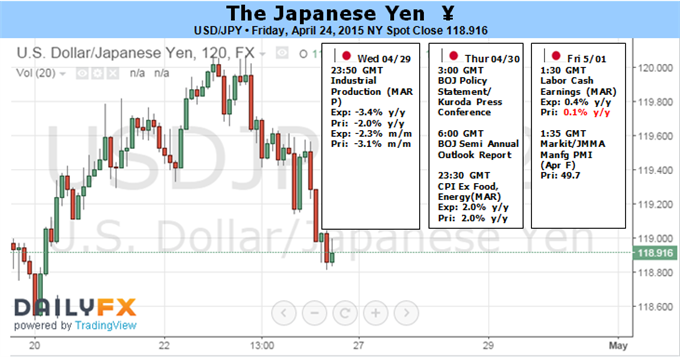 Japanese Yen to Look Past BOJ Decision, Focus on Greece and FOMC

The Bank of Japan seems unlikely to expand stimulus at its upcoming policy meeting. Recent comments from Governor Haruhiko Kuroda suggest he sees no urgency in fighting the pullback in headline inflation played out since mid-2014. The drop played out alongside a steep slide in oil prices, suggesting weakness will dissipate once rebasing takes effect in the second half of 2015. Indeed, core inflation has been remarkably stable near the target 2 percent level for the past 12 months and price-growth bets implied in bond yields have been rising since the beginning of the year.

The policy announcement may still prove market-moving if an updated set of economic forecasts proves especially ominous, foreshadowing a larger easing effort on the horizon. Follow-through on such a development may be limited however since leading economic activity surveys have pointed to decelerating growth since January. That means only a dramatically aggressive downgrade would deliver something material enough to force a rebalancing of already priced-in expectations.

Meanwhile on the external front, potent volatility catalysts abound. The outcome of negotiations between Greece and its EU/IMF creditors at a meeting of Eurozone finance ministers and central bankers in Riga over the weekend will set the tone initially. Athens is due to present the fourth revision of a reform package designed to unlock further bailout funding.

Both sides seem vested in a successful accord. EU and IMF officials want to avoid setting a precedent for a sovereign default within the Eurozone that potentially leads Greece out of the currency bloc. Meanwhile, Prime Minister Alexis Tsipras and company surely understand that disorderly redenomination will probably compound their country’s economic woes and may cost them their jobs. On balance, the announcement of an agreement that keeps Greece afloat – even if only in the near term – is likely to boost risk appetite and weigh on the Japanese Yen amid ebbing haven demand for the safety-linked currency.

The next major inflection point comes by way of the Federal Reserve policy meeting. A rate hike seems overwhelmingly unlikely just yet, putting the onus on the statement accompanying the announcement. The central bank seemed to switch to a month-to-month guidance regime at the March sit-down. If this continues, Chair Yellen and her colleagues on the rate-setting FOMC committee are unlikely to say much beyond hinting that tightening probably won’t arrive in May.

Such a result may embolden the recent dovish shift in investors’ perceived Fed rate hike timeline. This may lead the Yen higher, considering the average value of the Japanese unit against its top counterparts has displayed an increasingly significant inverse correlation with front-end US bond yields over recent weeks.