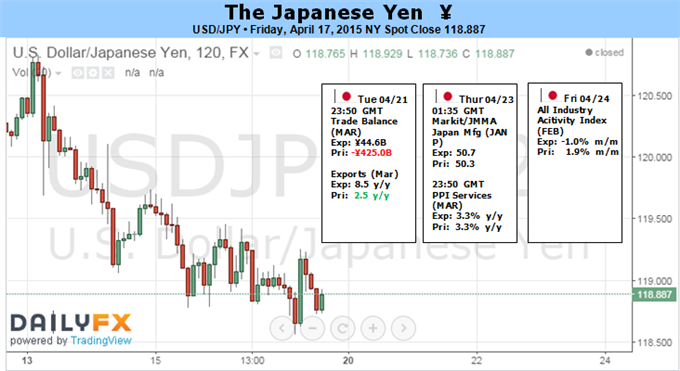 The fundamental event risks lined up for the final full-week of April may heighten the appeal of the Yen and spark a further decline in USD/JPY as the Japanese economy gets on a firmer footing.

With Japan expected to post a trade surplus for the first time since June 2012, prospects for a stronger recovery in 2015 may encourage the Bank of Japan (BoJ) to retain a wait-and-see approach at the April 30 interest rate decision as Governor Haruhiko Kuroda remains confident in achieving the 2% inflation target over the policy horizon. In turn, Japanese officials may continue scale back their verbal intervention on the local currency, and the bearish sentiment surrounding the Yen may continue to diminish over the near to medium-term as the central bank turns increasingly upbeat on the economy.

In contrast, the recent weakness in the U.S. may further dent expectations for a Fed rate hike in June, and another series of weaker-than-expected data prints may spark a larger correction in the greenback as interest rate expectations get pushed back. Despite expectations for a 0.6% rebound in U.S. Durable Goods, it seems as though lower energy prices are failing to drive private-sector consumption amid the ongoing weakness in retail spending, and another unexpected decline in demand for large-ticket items may trigger a larger correction in the greenback as it drags on the outlook for growth and inflation. In turn, we may see a growing number of Fed officials show a greater willingness to retain the zero-interest rate policy beyond mid-2015 at the April 29 meeting.

With that said, the improving terms of trade for Japan paired with the ongoing slack in the U.S. economy may prompt a further decline in USD/JPY, and the pair may continue to give back the rebound from March (118.32) amid the shift in the policy outlook.