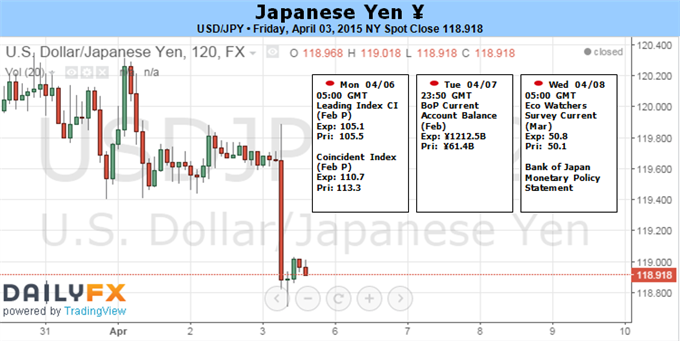 The Bank of Japan (BoJ) interest rate decision may heighten the appeal of the Japanese Yen and spur a further decline in USD/JPY should Governor Haruhiko Kuroda continue to endorse a wait-and-see approach following the April 8 meeting.

It seems as though the BoJ will preserve its current policy stance throughout the first-half of 2015 in light of the recent rhetoric from Mr. Kuroda, and the central bank head may largely retain his pledge to achieve the 2% inflation target over the policy horizon especially as the committee sees the downward pressures from the sales-tax hike dissipating.

However, the BoJ appears to be under increased pressure to further embark on its easing cycle as Kozo Yamamoto, an advisor to Prime Minister Shinzo Abe, argues that ‘further monetary easing is absolutely essential’ to combat the downside risks surrounding the Japanese economy and insists that the central bank should offer additional monetary support at the April 30 meeting. As a result, a material shift in the forward-guidance for monetary policy may highlight a growing dissent within the central bank and dampen bets for a further decline in the exchange rate as its U.S. counterpart, the Federal Reserve, remains on course to normalize monetary policy in 2015.

Nevertheless, the bullish USD/JPY sentiment amongst retail FX traders appears to be picking up even as the dollar-yen struggles to hold above the 120.00 handle. The DailyFX Speculative Sentiment Index (SSI) shows long positions are 20.2% higher from the previous week; with 65% of the retail trader long USD/JPY. With that said, the crowded stance may continue to give way for a further decline in the exchange rate as the retail crowd goes against the near-term bearish momentum in the dollar-yen.

In turn, more of the same from the BoJ may generate a larger correction in USD/JPY and the pullback from 120.35 may open the door for a test of the March Low (118.32) into the 61.8% Fibonacci retracement (118.20) as the pair carves a series of lower-highs in March. At the same time, we will also keep a close eye on the monthly opening range going into the first full week of April as full market participation returns on Tuesday following the extended holiday weekend, and the recent wave of U.S. dollar weakness may continue to take shape next week as the dismal data prints dampens bets for a mid-2015 Fed rate hike.