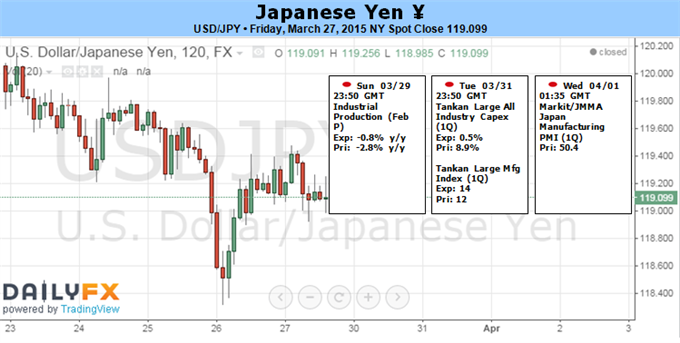 The fundamental developments coming out of the U.S. economy may continue to undermine the long-term bullish outlook for USD/JPY as recent headlines point to a growing dissent within the Federal Open Market Committee (FOMC).

At the same time, capital flows will also be closely monitored as Japan kicks off its 2015 fiscal-year, but the fresh batch of Fed rhetoric may largely dictate dollar-yen price action going into April especially as the Bank of Japan (BoJ) endorses a wait-and-see approach for monetary policy.

With a slew of Fed officials (Stanley Fischer, Jeffrey Lacker, Dennis Lockhart, Loretta Mester, Esther George, John Williams Janet Yellen, Lael Brainard and Narayana Kocherlakota) scheduled to speak next week, the new commentary may highlight a further delay in the normalization cycle as an increasing number of central bank officials see scope to retain the zero-interest rate policy beyond mid-2015. As a result, a further deterioration in interest rate expectations may trigger another test of near-term support around 118.20 (61.8% retracement), and USD/JPY may continue to congest ahead of the second-half of the year as the central bank remains in no rush to normalize monetary policy.

Nevertheless, the U.S. Non-Farm Payrolls (NFP) report may generate a bullish reaction in dollar-yen as market participants anticipate another 250K expansion in employment, while the jobless rate is projected to hold at an annualized 5.5% - the lowest reading since May 2008. However, another unexpected downtick in Average Hourly Earnings may drag on the greenback as Fed Chair Yellen highlights a cautious stance on the economy, especially as the central bank struggles to achieve the 2% target for inflation.

With that said, the 118.20 (61.8% retracement) support zone will be closely watched going into the week ahead, and the pair remains vulnerable for a further decline as it continues to carve a series of lower-highs. In turn, a failure to preserve the March low (118.32) may open the door for a move back towards the 117.15 region (78.6% expansion) should the key event risks dampen bets for a mid-2015 Fed rate hike.