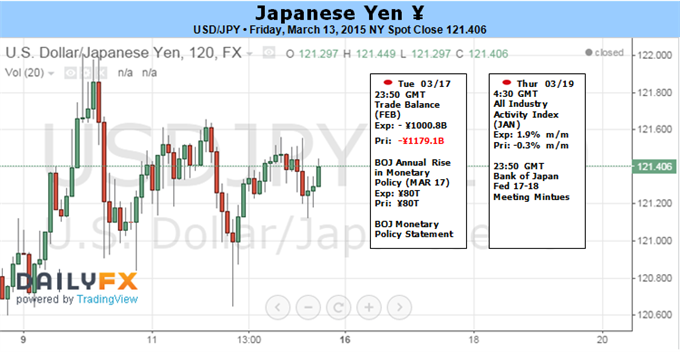 The Federal Open Market Committee’s (FOMC) March 18 meeting may overshadow the fresh commentary coming out of the Bank of Japan (BoJ) and heavily influence the near-term outlook for USD/JPY as Chair Janet Yellen and Co. are widely anticipated to remove the ‘patience’ language from the forward-guidance for monetary policy.

The Fed may implement a more hawkish twist to the forward-guidance and show a greater willingness to normalize monetary policy in mid-2015 as the central bank remains upbeat on the economy. Indeed, the 295K expansion in Non-Farm Payrolls along with the 5.5% unemployment rate may raise the Fed’s scope to raise the benchmark interest rate in June especially as the figure approaches the ‘natural rate of unemployment.’ However, the ongoing slowdown in retail/discretionary spending may becoming a growing concern for the central bank as lower energy costs largely fail to boost private-sector consumption, one of the leading drivers of growth. With that said, the updated economic projections coming out of the central bank may reflect a slower trajectory for the normalization cycle as the Fed continues to combat the disinflation environment.

In contrast, the BoJ interest rate decision may have a limited impact on the USD/JPY should we may get more of the same from Governor Haruhiko Kuroda. The central bank head may continue to endorse a wait-and-see approach as he remains confident in achieving the 2% target for inflation over the policy horizon, and market participants may end up turning a blind-eye to the event as we approach the end of Japan’s 2014 fiscal year.

With that said, the long-term outlook for USD/JPY remains bullish as the FOMC remains well on its way to remove the zero-interest rate policy (ZIRP), but the fresh development coming out of the central bank is likely to heavily impact near-term volatility in as market participants continue to speculate on the timing and the pace of the Fed’s normalization cycle.