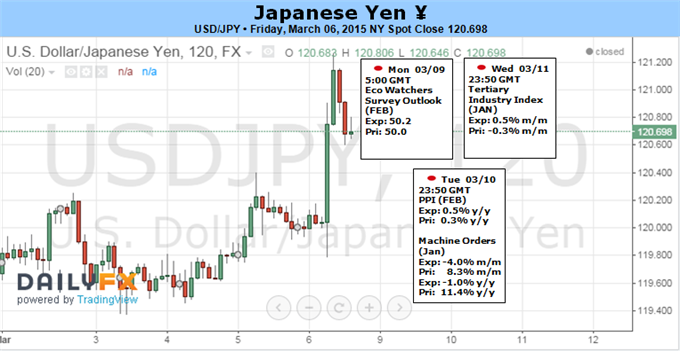 The fundamental developments due out next week may generate fresh monthly highs in USD/JPY should the data prints put increased pressure on the Bank of Japan (BoJ) to further embark on its easing cycle.

A downward revision in Japan’s 4Q Gross Domestic Product (GDP) report paired with another downtick in the Ministry of Finances’ (MoF) Business Outlook Survey may heighten the bearish sentiment surrounding the Yen as it undermines the BoJ’s pledge to achieve the 2% inflation target over the policy horizon. With that said, the ongoing slack in private sector activity may push BoJ Governor Haruhiko Kuroda to adopt a more dovish tone at the March 17 meeting, and the central bank may show a greater willingness to further expand its quantitative/qualitative easing (QQE) program in an effort to further insulate the ailing economy.

On the other hand, a rebound in U.S. Retail Sales accompanied by a pickup in household sentiment may fuel expectations for a stronger recovery in the world’s largest economy, and growing bets for a mid-2015 Fed rate hike may drive USD/JPY higher ahead of the next interest rate decision on March 18 as a growing number of central bank officials show a greater willingness to move away from the zero-interest rate policy (ZIRP). As result, the ongoing deviation in the policy outlook should continue to foster a bullish outlook for USD/JPY and the pair remains at risk of pushing fresh monthly highs as it breaks out of a consolidation phase

The failure to preserve the triangle/wedge formation opens the door for a continuation of the long-term bullish trend, but the move above the 121.00 handle may get increased attention as a growing number of Japanese officials warn against a further depreciation of the local currency. Nevertheless, the near-term breakout favors the approach to ‘buy-dips’ in USD/JPY especially as the Relative Strength Index (RSI) retains the bullish momentum carried over from earlier this year.