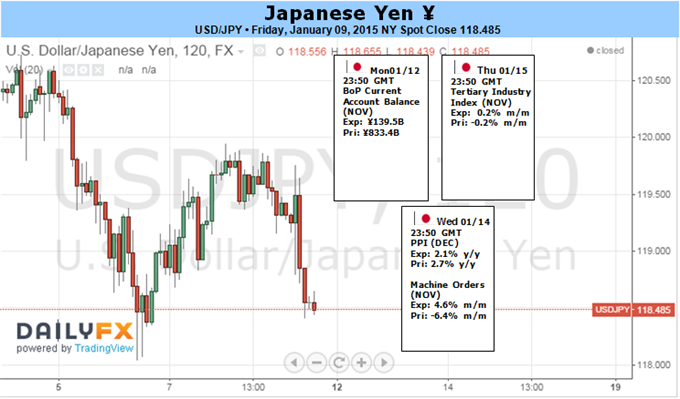 The Japanese Yen snapped a multi-week losing streak for the US Dollar as it rallied noticeably off of recent lows. A slowdown in global economic event risk may produce smaller moves ahead, but we’re watching key levels on the USDJPY as the risk of a larger JPY correction grows.

Traders sent the Japanese currency near fresh multi-year lows into the final trading days of 2014, but an important bounce in the New Year suggests conviction in the JPY-short trade (USDJPY-long) has faded. Price action seems remarkably similar to what happened exactly 12 months ago: the USDJPY topped on the first trading day of 2014 on its way to a four percent correction. A comparable move would send the Dollar to ¥115 before a resumption in the overall uptrend.

A relatively quiet week in both Japan and the US nonetheless suggests traders may wait until the following week’s highly-anticipated Bank of Japan policy meeting to force big Yen moves. Yet traders should keep a close eye on USDJPY price action as it trades at potentially significant price support, and a break below month-to-date lows near ¥118 could force a larger move towards December’s trough at ¥115.60.

A strong correlation between the Japanese Yen and the Nikkei 225/US S&P 500 tells us the next big USDJPY move could coincide with equity market turmoil. An important drop in the S&P Volatility Index (VIX) shows that few fear any such tumbles, but market conditions can and do change quite quickly.

Overall outlook for the Dollar and Japanese Yen in 2015 make a USDJPY-long position one of our favorite trades of the year. Yet a year is a long stretch of time in trading markets, and prices do not move in straight lines. We are cautious on fresh USDJPY-long positions given clear risk of a larger short-term correction—particularly ahead of the Bank of Japan meeting on January 20.