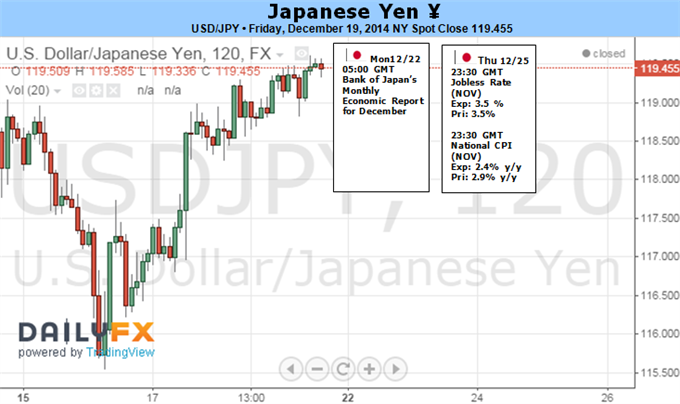 The outcome of Japan’s snap election passed without making much noise in the financial markets last week as expected. The LDP sailed to an easy victory and secured the super-majority it needed to ensure the continuity of “Abenomics”, at least through the near to medium term.

With the last Bank of Japan policy meeting of the year also behind them, investors have been left with external forces as the foremost driver of Japanese Yen price action. Seasonal capital flows stand out as the most potent potential driver on this front and may drive the unit higher in the final weeks of 2014.

Swelling risk appetite – embodied by a relentless push upward by US share prices – was a defining feature of the macro landscape over the past year. This seemed to reflect a response to Fed monetary policy: the steady QE tapering process defined a clear window in which policymakers would not withdraw stimulus.

The landscape probably won’t look as rosy in 2015. While the precise timing of liftoff for the Fed policy rate is a matter of debate, the commencement of stimulus withdrawal at some point in the year ahead seems to be a given. The prospect of higher borrowing costs may fuel liquidation of exposure reliant on cheap QE-based funding as market participants lock in year-end performance ahead of tougher times ahead.

For currency markets, such a scenario may take the form of an exodus from carry trades, which are usually funded in terms of the perennially low-yielding Japanese unit. That would imply a wave of covering on short-Yen positions, pushing prices higher.