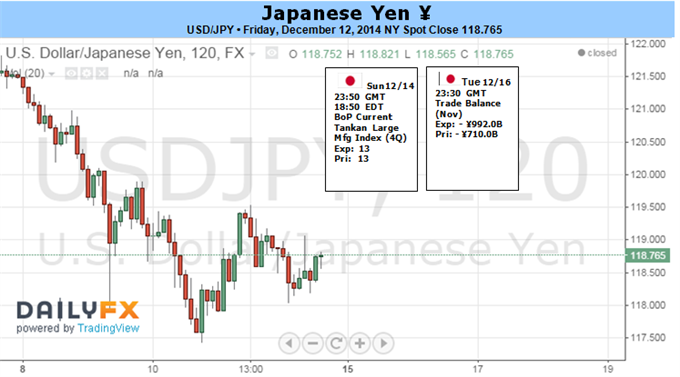 The near-term outlook for USD/JPY remains mired by Japan’s December 14 snap election, but the ongoing deviation in the policy outlook should continue to produce a further advance in the exchange rate as a growing number of Fed officials show a greater willingness to normalize monetary policy in 2015.

Despite the risk for a material shift in fiscal policy, recent headlines suggests ‘Abenomics’ will continue to influence the Japanese Yen in the year ahead as the Liberal Democratic Party (LDP) is widely expected to retain majority in the lower-house of the National Diet. As a result, the Bank of Japan (BoJ) may continue to highlight a dovish outlook for monetary policy at the December 19 meeting, and Governor Haruhiko Kuroda may keep the door open to further expand the asset-purchase program as the technical recession undermines the central bank’s scope to achieve the 2% target for inflation.

In contrast, there’s growing speculation the Federal Open Market Committee (FOMC) will remove the ‘considerable time’ phrase and implement a more hawkish twist to the forward-guidance as lower energy costs boost disposable incomes for U.S. households. The improved outlook for personal consumption – one of the leading drivers of growth – may encourage the Fed to boost its economic and interest rate projections as the central bank anticipates a stronger recovery in 2015. With that said, the bullish sentiment surrounding the greenback may gather pace over the remainder of the year should the fresh developments coming out of the FOMC heighten interest rate expectations.

In turn, the fundamental outlook continues to cast a long-term bullish outlook for USD/JPY, and we will retain the approach to buy-dips in the exchange rate unless there’s a meaningful change in fiscal/monetary policy. Dollar-yen appears to be coiling for a move higher as it holds above the 117.00 handle, with the next key topside objective for USD/JPY comes in around 122.30-40, the 78.6% Fibonacci retracement from the 2002 decline.