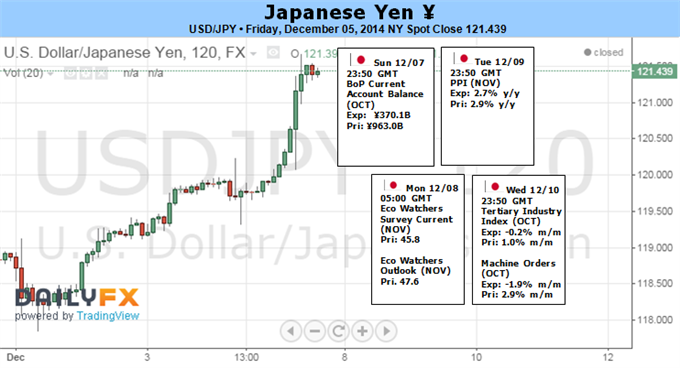 Yen to Look Past Japan Election with US Policy, Seasonal Forces Key

Domestic developments remain largely an afterthought for the Japanese Yen even as the December 14 snap election looms ahead. Polls ahead of the vote suggest Shinzo Abe and his LDP/Komeito coalition will probably retain its two-thirds majority, giving the Prime Minister the mandate he is after. As we discussed two weeks ago, the inherently expansionary nature of “Abenomics” means the markets are unlikely to be perturbed unless the current government looks to be genuinely threatened. As long as the status quo looks firmly set, the whole ordeal will probably pass relatively quietly.

This puts the focus to external factors. The Yen plunged to a seven-year low against the US Dollar following November’s impressively strong Nonfarm Payrolls print, but the response from risk appetite was suspiciously lackluster. Indeed, the S&P 500 stock index – a benchmark for sentiment trends – was barely changed in Friday’s session. This may be foreshadowing the emergence of year-end capital flows as a formative driver of price action.

Risk-taking has been well-supported in the past year but markets would be wise to question the likelihood of more of the same in 2015. While the precise timing of the first post-QE Fed interest rate hike is a matter of some debate, the general likelihood of stimulus withdrawal in the year ahead is increasingly seen as a given. That may drive liquidation of risk-geared exposure ahead of the calendar year turn as market participants move to lock in performance numbers ahead of a more difficult 12-month stretch ahead.

For currency markets, such a scenario may take the form of an exodus from carry trades, which a usually funded in terms of the perennially low-yielding Japanese unit. That would imply a wave of short-covering on anti-Yen exposure, pushing prices higher. The extent to which US economic news-flow can alter this dynamic remains unclear. November’s Retail Sales and PPI reports as well as December’s UofM Consumer Confidence gauge are on tap. If these prove strong – fueling Fed tightening bets – another Yen selloff mirroring the markets’ post-NFP reaction may be triggered. Outcomes broadly close to forecasts that do not dramatically disrupt the established policy outlook may yield the spotlight to seasonal forces however.