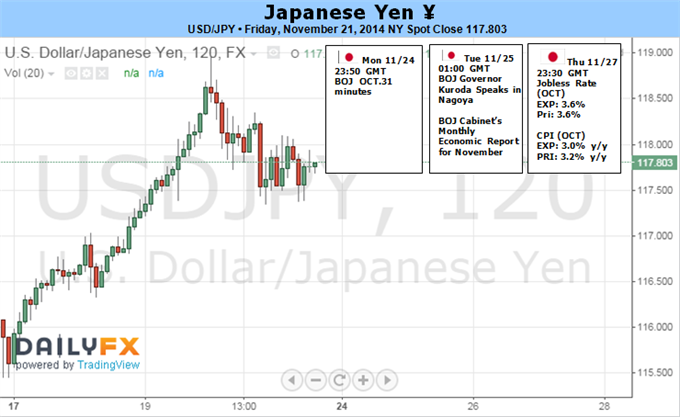 The markets responded with relative indifference to what might’ve been expected to be volatility-inspiring news-flow out of Japan last week. Third-quarter GDP figures showed the economy sank back into recession. This triggered Prime Minister Shinzo Abe to dissolve the lower house of the Diet and call a snap election for mid-December to win a mandate for delaying next year’s sales tax increase.

The Yen largely acted as if nothing happened, with prices continuing to drift higher against the US Dollar at the same measured pace seen over the last three weeks. For its part, Japan’s benchmark Nikkei 225 stock index oscillated in a narrow range having set a seven-year high.

Such complacency seems to reflect a market that was amply primed for what was to transpire. Indeed, data from Bloomberg shows media mentions of a possible sales-tax hike delay began to build as early as three weeks ago. Furthermore, investors seem rather sanguine about the whole ordeal.

This seems to make sense. Doubling the sales tax from 5 to 10 percent was a central policy fixture of the DPJ administration of Yoshihiko Noda, Mr. Abe’s predecessor. The Prime Minister shrewdly allowed the first phase of the increase – from 5 to 8 percent – to take effect this year. He probably figured that he could claim a deficit-fighting victory if the economy took the move in stride or score a win against the DPJ if it didn’t.

The latter seems to be playing out and Abe has dutifully called an election in response. His aim is surely to use the onset of recession to trash the DPJ’s economic stewardship and secure a broader grip on power. Given the distinctly expansionary nature of “Abenomics”, it seems hardly surprising that the markets are not perturbed by the prospect of giving the current administration a freer reign.

External factors may disturb the calm however. US economic data began to gather upward momentum relative to consensus forecasts once again last week. More of the same as consumer confidence, home sales, and durable goods orders figures cross the wires in the days ahead might fuel speculation that the Fed will move sooner to deliver its first post-QE3 interest rate hike. That may set off risk aversion, pushing the Yen higher amid liquidation of carry trades funded in terms of the perennially low-yielding currency.

Seasonal forces may amplify this dynamic. While risk appetite flourished in 2014, the generally accepted expectation of on-coming Fed stimulus withdrawal surely casts doubt on more of the same next year in the minds of investors. That may fuel a desire to book profits on risk-sensitive exposure as the year-end holiday cycle gets underway, securing yearly performance numbers ahead of what might be tougher times ahead.