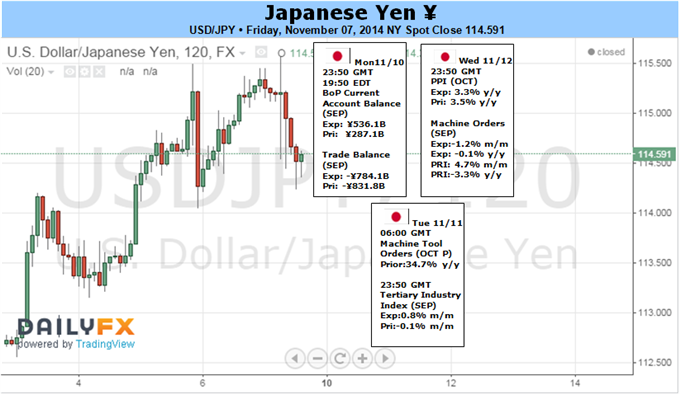 The Japanese Yen has been distinctly unloved since the Bank of Japan’s surprise expansion of monetary stimulus last week, with the currency sinking to a six-year low against its leading counterparts. The beleaguered unit’s fortunes may reverse in the week ahead however as markets come to terms with the new BOJ status quo and the spotlight shifts back to risk sentiment trends.

The central object of speculation dominating the financial markets’ attention is the degree to which a post-QE3 US recovery is able to countervail weakness in the Eurozone and China. The dominant consensus looks increasingly worrisome, with a survey of economists polled by Bloomberg showing that the baseline 2015 global GDP growth outlook has fallen to a 20-monh low of 2.9 percent.

The deterioration in the growth outlook has played out against a backdrop of ECB and BOJ stimulus expansion, meaning traders do not believe these efforts will meaningfully offset the gradual withdrawal of Fed support. For its part, the US central bank has clearly demonstrated a willingness to look past near-term downswings in the business cycle as it marches toward tightening, meaning its conviction will be easily swayed.

In the week ahead, expected improvements in US Retail Sales figures (+0.2% m/m in October vs. -0.3% in September) as well as the University of Michigan Consumer Confidence gauge (87.5 in November vs. 86.9 in October) stand to reinforce the Fed’s trajectory. Meanwhile, a worrisome news-flow from the Eurozone and China may amplify headwinds facing global growth.

The first estimate of third-quarter Eurozone GDP is due to show that output added 0.1 percent after stalling in the prior period. Separately, October’s Chinese Industrial Production figures are seen registering an 8 percent year-on-year increase, unchanged from the previous month. Economic data outcomes from both the currency bloc and the East Asian giant have broadly disappointed relative to consensus forecasts recently however, opening the door for downside surprises.

Disappointing European and Chinese news-flow coupled with another round of evidence supporting the Fed’s steady progression toward interest rate hikes in 2015 will probably make for a toxic mix of sentiment cues. The ensuing bout of risk aversion threatens to trigger liquidation of Yen-funded carry trades, sending the Yen broadly higher against most of its counterparts.