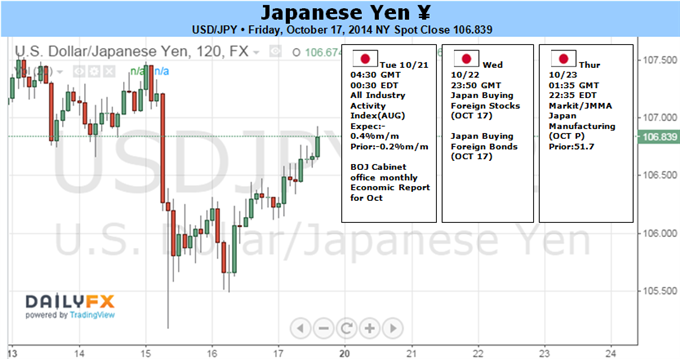 A lull in homegrown event risk will keep macro-level trends in focus for the Japanese Yen in the week ahead. The inverse correlation between the currency’s average value against its leading counterparts and the MSCI World Stock Index – a proxy for market-wide risk appetite – now stands at a hefty -0.72 (on 20-day percent change studies). That puts the Yen firmly into the “safety” side of the risk on/off asset spectrum and hints the currency stands to recover further as sentiment continues to sour.

The central concern preoccupying investors is the ability of a resurgent US economy to underpin global growth, offsetting weakness in China and the Eurozone even as the Federal Reserve prepares to wind down the QE3 stimulus program later this month. A steady stream of high-profile economic data releases will help inform this debate in the week ahead, generating volatility for underlying risk sentiment trends and with them the Japanese Yen.

In China, the third-quarter GDP figure is in the spotlight. Consensus forecasts put the year-on-year growth rate at 7.2 percent, marking the weakest reading since the post-crisis trough in the first quarter of 2009. Economic news-flow from the East Asian giant has increasingly deteriorated relative to expectations since mid-August (according to data from Citigroup). That suggests analysts are underestimating the degree of the unfolding downturn and warns that the realized GDP print may be even more dismal than forecasts imply.

Turning to the Euro area, the preliminary set of October’s PMI figures is due to show the pace of manufacturing- and service-sector activity growth slowed for a third consecutive month, yielding the weakest results in 14 months. Adding insult to injury, the ECB seems resigned to complacency. Financial conditions in the region have deteriorated since mid-September even as the central bank introduced negative deposit rates and conducted its first TLTRO operation. In response, ECB officials have counter-intuitively used public speaking opportunities to play down expectations for the upcoming asset purchase program.

Finally, the US data docket is headlined by September’s CPI report. The headline year-on-year inflation rate is expected to slow to 1.6 percent, the lowest since March. However, leading survey data warns that price growth accelerated, with factory-gate prices rising at the sharpest pace yet in 2014 and service-sector output costs reaching a five-month high. That opens the door for an upside surprise, which would help rebuild 2015 Fed rate hike expectations. The prospect of tightening in one of the world’s three main growth hubs even as the other two decelerate bodes ill for risk appetite, amplifying liquidation of Yen-funded carry trades and helping the Japanese unit upward.