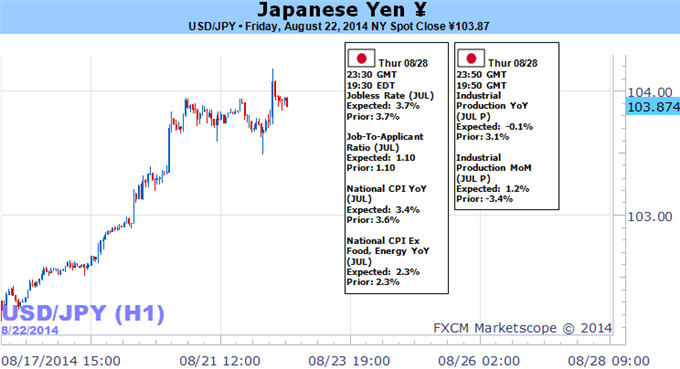 Japanese Yen at Make-or-Break Levels Ahead of Key Data

Japanese Yen at Make-or-Break Levels Ahead of Key Data

US Dollar might finally be breaking versus Japanese Yen

For Real-Time Potential Trade Setups on the Japanese Yen, sign up for DailyFX on Demand

The Japanese Yen tumbled towards yearly lows versus the US Dollar, and key data in the week ahead could decide whether the USDJPY makes a sustained break of its year-to-date trading range.

Traders sent the Yen steadily lower despite a relatively empty economic calendar and limited market-moving news headlines. Event risk picks up as we look to the Jackson Hole Economic PolicySymposium over the weekend, while Japanese Jobless Rate figures as well as National Consumer Price Index inflation results could drive moves through late-week trading.

Early indications suggest that the Jackson Hole conference may prove far less significant than expected. Yet it’s worth noting Bank of Japan Governor Haruhiko Kuroda will join Bank of England Deputy Governor Ben Broadbent and Central Bank of Brazil Governor Alexandre Tombini on a panel to discuss “Labor Markets and Monetary Policy” on Saturday morning. Any important policy announcements or changes in forecasts seem unlikely, but we can’t rule out any gaps in JPY and GBP pairs through Sunday’s market open.

It may subsequently take major surprises out of upcoming Japanese inflation and jobless figures to drive a more substantial Yen breakdown. Traders have shown little interest in anything except sharply worse-than-expected domestic economic data, and the week ahead will likely prove no exception.

It seems cliché to claim that a specific currency is “at a crossroads”, but it is no exaggeration to claim that it may be a make-or-break week for the Yen as it trades near critical support. Major currency reversals often coincide with the beginning and end of the calendar month, and the fact that we’re headed into the final week of August puts special focus on the fast-falling Yen.

Traders for their part remain positioned for a USDJPY breakout; futures data show large speculators are near their most short JPY (long USDJPY) since December. FX options show that Yen volatility prices remain near multi-week highs but remain fairly low by historical standards. It may take a significant build in FX volatility to drive the next leg of Japanese Yen weakness. – DR