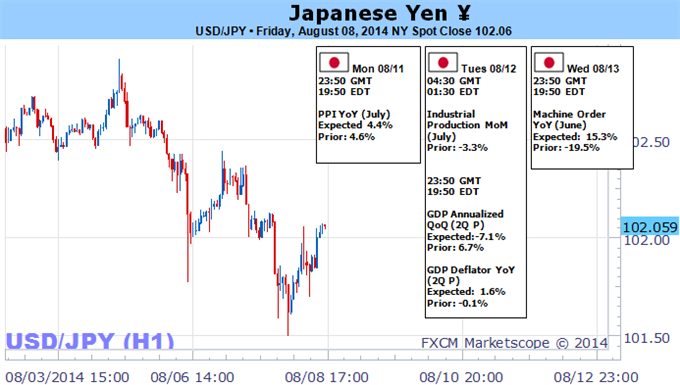 The Japanese Yen rallied sharply a complete lack of market news. Why is this significant, and what does it tell us about the next moves for the USDJPY?

Professionals scrambled for explanations on why the USDJPY posted a sharp 50-point tumble in the typically-quiet period after London markets closed. And indeed some initially pointed to a so-called “fat finger trade”—where a trader accidentally places an especially-large order that sends markets reeling. Yet the truth was far simpler: there was indeed a spike in USDJPY selling (Yen buying), but nothing about it seemed accidental.

This fact is significant because large speculators were heavily short the Japanese Yen (long USDJPY) headed into the week, and recent price action suggests many are losing patience with those positions and exiting their trades. Thus the USDJPY looks likely to trade towards range lows unless we see an important shift in trader sentiment.

Focus will turn to upcoming Japanese GDP growth figures for the second quarter, as these economic figures will be the first to include government consumption tax hike. Consensus forecasts predict that the economy posted its worst quarter for growth since the global financial crisis. It is subsequently surprising to note that the Bank of Japan shows little willingness to ease policy further. Yet any worse-than-expected figures may force the USDJPY higher as pressure mounts on the central bank to act.

Japanese Yen volatility prices have risen sharply off of recent record lows as traders position for bigger moves ahead. Whether or not the USDJPY breaks significantly out of its recent range could very well depend on key economic data.

It will likewise be important to watch volatility in broader financial markets as the US S&P 500 drops sharply off of recent record peaks. Whether or not equities can recoup losses may likewise dictate price action in the USDJPY. - DR