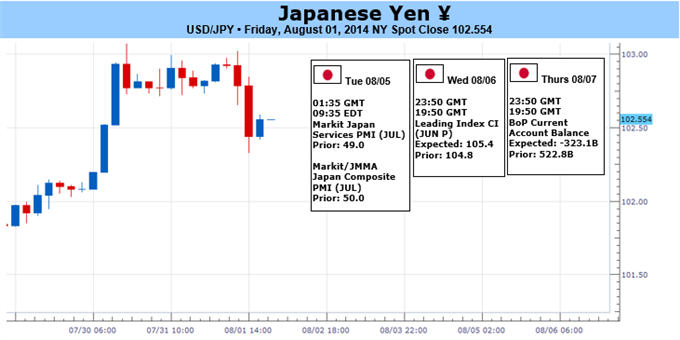 The USD/JPY broke out of the bearish trend from earlier this year as the Federal Open Market Committee (FOMC) scaled back its dovish tone for monetary policy, but the Bank of Japan (BoJ) interest rate decision on August 8 may boost the appeal of the Japanese Yen as the central bank remains confident in achieve the 2% inflation target over the policy horizon.

It seems as though the BoJ will once again refrain from further expanding its asset-purchase program as Governor Haruhiko Kuroda remains upbeat on the Japanese economy, and we may get more of the same from the central bank as the current BoJ projections account for a 10% rise in the sales-tax. With that said, a further shift in the policy outlook may limit the near-term advance in the USD/JPY as the pair fails to put in a close above the 103.00, and the dollar-yen may face a near-term correction during the first full-week of August as the Non-Farm Payrolls (NFP) report fails to boost interest rate expectations for the U.S.

At the same time, it seems as though the USD/JPY is decoupling with risk sentiment following the FOMC interest rate decision, and the fundamentals may have a greater impact in driving future price action for the dollar-yen as the Fed scales back its dovish outlook for inflation. As a result, a growing dissent within the FOMC may continue to heighten the appeal of the greenback, and the USD/JPY may continue to pare the decline from earlier this year should we see a more material shift in the policy outlook.

Nevertheless, the USD/JPY may face a near-term pullback during the first full-week of August as the Relative Strength Index (RSI) turns around ahead of overbought territory, but we will revert back to the approach of looking for opportunities to ‘buy dips’ in the dollar-yen as the pair breaks out of the downward trend from earlier this year.