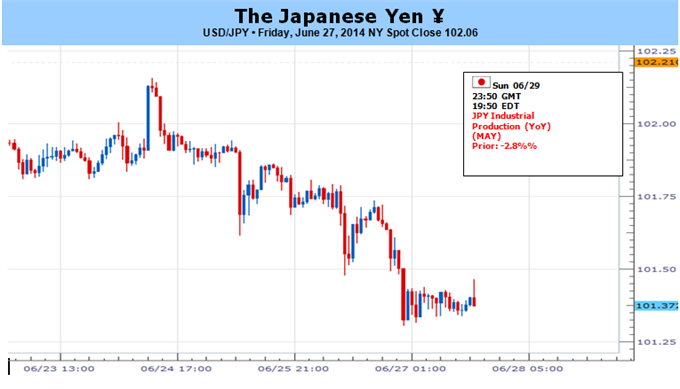 Japanese Yen Shows Signs of Life, but May be Good Time to Sell

The Japanese Yen showed signs of life as it posted its largest weekly gain versus the US Dollar in two months. But will the coming week produce the long-awaited breakout?

Key economic event risk out of Japan and the United States point to stronger USDJPY volatility in the days ahead. For Japan, traders look to Industrial Production growth figures and Tankan Manufacturing survey data to guide economic outlook. Yet sharper moves may need to wait for Thursday’s US Nonfarm Payrolls report as the Japanese currency has shown relatively little sensitivity to domestic economic data.

We may need to see especially large surprises out of upcoming economic releases to force a Dollar or Yen breakout. Interest rates for both currencies are at or near record-lows, and steady outlook for both Bank of Japan and US Federal Reserve monetary policy gives little reason to expect changes through the foreseeable future.

And therein lays the biggest reason the Dollar/Yen remains in a tight trading range: markets are waiting for something big to happen. What that could be is anyone’s guess, but as it stands USDJPY volatility prices/expectations are trading near record lows.

It’s important to note that volatility has historically returned to its long-term average; extremely slow market moves can’t last forever. We’ll watch the USDJPY near critical year-to-date lows near ¥100.80. Absent a major shift in market conditions, however, the pair is likely to stick to its broader trading range.