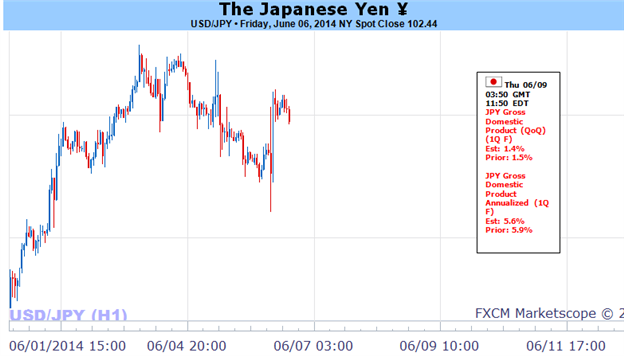 The USD/JPY may continue to consolidate in the week ahead as it retains the wedge/triangle formation from earlier this year, but the Bank of Japan (BoJ) interest rate decision may heighten the appeal of the Yen as the central bank is widely expected to retain a positive outlook for the region.

Indeed, BoJ board member Takehiro Sato argued that there is ‘no need’ to adjust policy at the current juncture as the central bank continues to anticipate a ‘moderate’ recovery, and it seems as though we will get more of the same at the June 13 meeting as Governor Haruhiko Kuroda remains confident in achieving the 2% target for inflation over the policy horizon. However, we may see a growing number of BoJ officials scale back their dovish tone for monetary policy as the sales-tax hike underpins the fastest pace of price growth since 1991, and a further shift in the policy outlook may continue to dampen the bearish sentiment surrounding the Japanese Yen as the central bank remains in no rush to further expand its asset purchase program.

With that said, it seems as though the Fed will also stick to its current course for monetary policy as Chair Janet Yellen remains reluctant to move away from the zero-interest rate policy (ZIRP), and the USD/JPY may continue to face a narrowing range over the near-term as the Federal Open Market Committee (FOMC) looks to carry its highly accommodative policy stance into the second-half of the year.

As a result, the USD/JPY may continue to face a narrowing range as it struggles to push above the May high (103.01), but the dollar-yen remains at risk of facing increased volatility during the summer months as it approaches the apex of the wedge/triangle formation from earlier this year. In turn, a less-dovish BoJ interest rate decision may generate a more meaningful decline in the USD/JPY, and the pair may come up against the 101.40-50 region to test for near-term support amid the ongoing series of lower-highs in the exchange rate. - DS