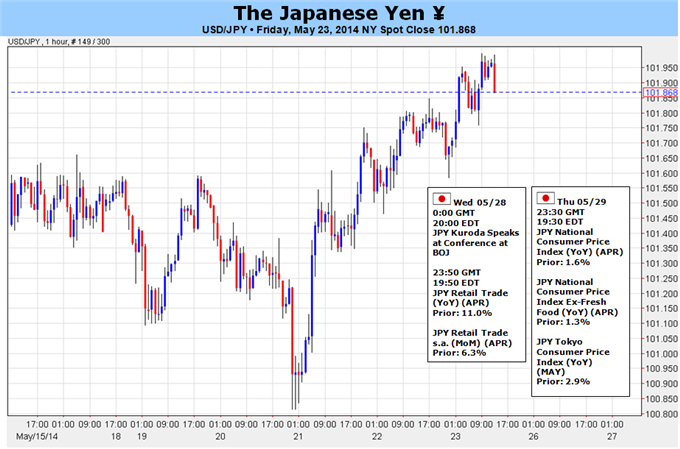 The USD/JPY pared the decline following the Bank of Japan (BoJ) interest rate decision, with the pair working its way back towards former support (101.80-102.00), but the economic developments due out next week may instill a more bearish outlook for the dollar-yen should the data prints spark a greater deviation in the policy outlook.

The BoJ Minutes may continue to heighten the appeal of the Japanese Yen as the central bank turns increasingly upbeat on the economy, and we may see a growing number of central bank officials scale back their dovish tone for monetary policy as Governor Haruhiko Kuroda remains confident in achieving the 2% target for inflation. With that said, it seems as though the sales-tax hike may have a limited impact on the economic recovery while raising the outlook for inflation as Japan’s Consumer Price Index (CPI) is expected to increase an annualized 3.3% in April, and a marked uptick in the headline reading for price growth may continue to generate lower highs & lower lows in the USD/JPY as it dampens bets of seeing the BoJ further expand its asset-purchase program.

At the same time, the advance U.S. 1Q GDP report may also put increased downside pressure on the dollar-yen as the world’s largest economy is expected to contract 0.5% during the first three-months of 2014, and a marked downward revision in the growth rate may drag on interest rate expectations as Fed Chair Janet Yellen remains in no rush to normalize monetary policy.

Given the string of lower highs & lower lows, the downward trending channel may continue to take shape going into the end of May, and the USD/JPY may make a more meaningful run at the 100.50 region should the fundamental developments spur an increased deviation in the policy outlook. - DS